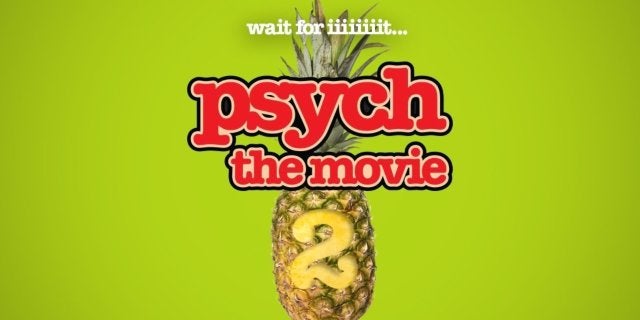 Earlier this week, the official announcement trailer for Psych: The Movie 2 hit the internet. Today, it’s National Pineapple Day — which of course means that Shawn (James Roday) and Gus (Dule Hill) are back out there talking to fans of delicious flavor wherever they may be.

Psych 2 centers on a shooting — that of Carlton Lassiter. In a vintage Psych-style Hitchcockian nod, Lassie begins to see impossible happenings around his recovery clinic. Shawn and Gus return to the Chief’s side in Santa Barbara and are forced to navigate the personal, the professional, and possibly the supernatural. Separated from their new lives in San Francisco, our heroes find themselves unwelcome in their old stomping grounds as they secretly untangle a twisted case without the benefit of the police, their loved ones, or the quality sourdough bakeries of the Bay Area. What they uncover will change the course of their relationships forever.

A big part of the sequel’s appeal: the return of Tim Omundson as Santa Barbara Police Chief Carlton Lassiter. Lassie was conspicuously absent for most of the first movie after Omundson had a stroke that rendered him unable to work for a while.

Not only is Tim Omundson back for Psych: The Movie 2, but he is bringing friends with him. Jimmi Simpson will return to reprise his role as Mary Lightly — a character who died during the series run of Psych on USA Network but has gone on to make post-humous appearances. His character, like Omundson’s, appeared briefly in Psych: The Movie, during a dream sequence alongside a pony in a onesie voiced by The Outsiders author S. E. Hinton. (Yes, really.) Also joining Omundson and Simpson in the film is a newcomer to the Psych franchise: Community and Stargirl actor Joel McHale.

Little is yet known about McHale’s role in the film, who will be “mysterious character from Lassie’s past,” although NBC Universal have confirmed for ComicBook.com that the widespread fan speculation that he would appear (spurred on by a social media post from Omundson, which you can see below) was indeed correct. If he shoudl turn out to be the fan’s villain (not a bad bet for a celebrity cameo in a TV movie), it would be an interesting twist, since McHale’s first DC Comics role will be in Stargirl for DC Universe later this year. The actor who played Psych: The Movie villain the Thin White Duke? Zachary Levi, in one of his final pre-Shazam! roles.

Psych: The Movie 2 will be airing on USA this holiday season. Keep your eyes on ComicBook.com for details about potential San Diego or New York Comic Con panels for the film.

In this latest episode we go all-in on Avengers: Endgame heading back to theaters, Annabelle & Chucky reviews, a bit of WWE Stomping Grounds and more! Make sure to subscribe now to never miss an episode!