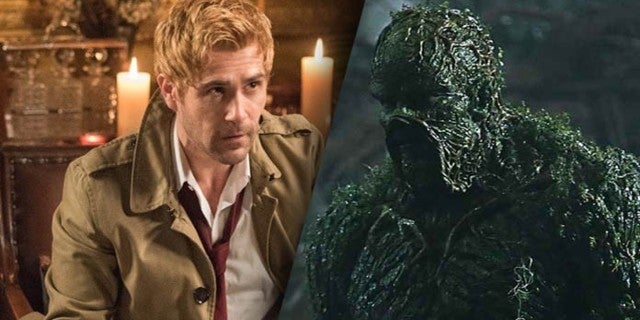 It’s a bittersweet situation: Swamp Thing‘s first season continues airing with new episodes weekly on DC Universe, but as the series gets deeper into its story, along with it comes little hints and teases about characters, team-ups, and crossovers that might have appeared in future seasons if only the series hadn’t been cancelled less than a week after its first episode debuted. Such was the case in this week’s “Drive All Night”, teasing a Constantine crossover that will now never come to pass.

The episode sees the introduction of The Phantom Stranger, a character in comics who is a mysterious being who shows up at times of great upheaval and danger. When we first see him in “Drive All Night”, he comes by boat with the radio playing “In Dreams” by Roy Orbison with The Phantom Stranger lip synching the lines from the song’s opening, “a candy-colored clown they call the sandman”. While it may just seem like an ordinary part of the scene fans of comics will recognize the song as having a strong connection to a fan-favorite character within the Vertigo/DC Universe: John Constantine. In comics, the first time Constantine meets The Sandman in Neil Gaiman’s book of the same name, “In Dreams” is one of the Constantine hears over the course of the story.

The moment is just a little Easter Egg within Swamp Thing, but for fans it’s a reminder of the larger loss of that much-wanted Constantine/Swamp Thing crossover. And it isn’t just fans who would want to see the two characters come together on Swamp Thing. The actors do, too. Derek Mears, who plays the actual Swamp Thing monster in the series recently opened up about the cancellation of Swamp Thing and spoke about how he would have loved such a crossover.

“Look, if it’s the same showrunners and people involved in the show we did, I will go to hell with this character because I had so much fun,” Mears said. “As a fan, seeing, if they ever had Swamp Thing and Constantine together, that would be just dynamite.”

Since the cancellation, more details about the long-term plans for Swamp Thing have also emerged, with Business Insider revealing that one of their sources admitted “the show had a possible three-season arc, and the feeling on set was that it could have gone past that if it was a hit, with characters spinning off into their own shows. The source used the specific example of a potential ‘Justice League Dark’ team-up series.”

It’s the idea of that Justice League Dark team-up that Mears also said is something that he things would have been “the best”.

“No, just on my own speculation when we were on set being that I’m a fan going ‘oh cool, what could we possibly do’ and you start to fantasize about where it could possibly go, but then when I read online the rumors they were talking about a 3 season arc and a Justice League Dark show or movie I was like ‘oh, are you kidding me? That would have been the best!'”

Did you catch the nod to Constantine (and The Sandman) in this week’s episode of Swamp Thing? Let us know in the comments below!