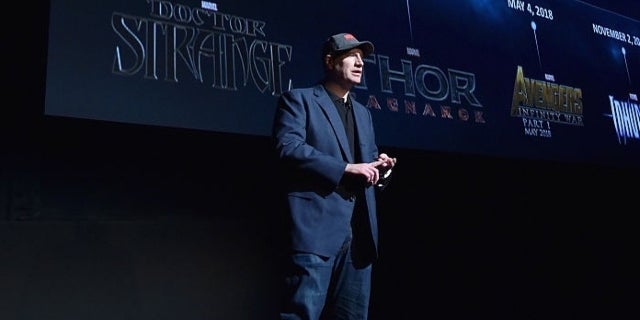 It’s been nearly five years since Marvel Studios last revealed an entire slate of movies. At the time, Phase Two of the Marvel Cinematic Universe had just been wrapping up and president Kevin Feige and company were hard at work pushing everything into Phase Three and beyond. The crowd at a jam-packed El Capitan Theater got the fortunate chance at seeing nearly a dozen movies revealed at the time, including the then-titled Avengers: Infinity War – Part I and Avengers: Infinity War – Part 2.

The whole event kicked off with Feige announced the third Captain America would be titled Captain America: Serpent Society, a move that while intriguing, didn’t sound as attractive as many of the other options the team could have gone with. Before long, Feige then mentioned that wasn’t actually the title and as he welcomed Chris Evans and Robert Downey Jr. on stage, the real title was revealed as Captain America: Civil War, to much more applause.

So the question is begging to be asked — are the same tricksters going to try and pull another fast one next month at San Diego Comic-Con? The studio is in the most peculiar situation they’ve been in since the big “El Capitan Dump,” in the sense that there are currently no officially-announced Marvel Studios films set for release. Because of that, there’s certainly no stopping Feige from leading on 7,000-plus rabid Marvel fans in the sprawling Hall H to have a bit of fun — after all, that’s what this is all about, right?

It should be noted that just because no films have officially been announced, that doesn’t mean we aren’t aware of a few of the movies that are on the way. Black Widow, after all, is currently in production overseas while both The Eternals and Shang-Chi are moving right along in pre-production, with both films presumably starting to film in the coming months. Outside of that, we know that both Doctor Strange and Black Panther are getting sequels — as confirmed by Feige himself in the past. Though it hasn’t been teased, Captain Marvel is all but guaranteed to get a follow-up eventually as well.

What do you think Marvel will eventually end up revealing at San Diego Comic-Con? Let us know your thoughts in the comments below or by tweeting me at @AdamBarnhardt to chat all things MCU!

Avengers: Endgame has returned to theaters ahead of Spider-Man: Far From Home on July 2nd. Captain Marvel is now available wherever movies are sold.