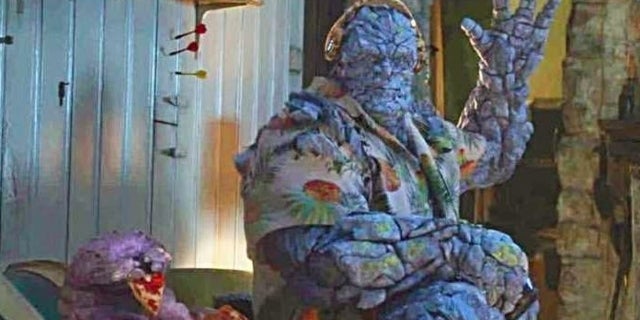 Avengers: Endgame was finally released on digital this week, which means fans now have access to the film’s commentary featuring directors Joe and Anthony Russo, and co-writer, Christopher Markus. During the nearly three hour film, the creators discuss the filmmaking process and share fun, behind-the-scenes tidbits. One thing they revealed during their recording was how much they enjoyed the dynamic between Thor, Korg, and Miek in the scene on New Asgard. In fact, they joked they’d like to see a series starring the trio.

“I wanna see, like, seven seasons of this show. Of Thor, Korg and Miek hanging out in this cabin. This feels like a sublime BBC Comedy,” Joe Russo joked.

“I’m also very fond of the fact that the magical weapon he took the entire last movie to get a hold of is now a bottle opener,” Markus added.

“Also major kudos to our sound design team because that ring out on that bottle cap opening is very sweet,” Anthony Russo said.

While it’s unlikely we’ll be getting an entire show based on these three hilarious pals, many fans are hoping Korg and Miek will be making an appearance in the upcoming fourth Thor film, Thor: Love and Thunder. Considering Taika Waititi is returning to direct and also happens to voice Korg, there’s a good chance we’ll be seeing the lovable aliens again.

In a previous interview, Markus spoke about Thor’s journey and praised Waititi for what he did for the character:

“He got re-toned by Taika Waititi, [writer] Eric Pearson and Chris Hemsworth in Thor: Ragnarok, and that was a gift to us,” he explained. “Basically from his first movie, he is headed for the throne. He has all this burden of purpose on him. And so his arc in all these movies is learning to let go of what people expect of him and embrace what he himself feels he is,” he added. “It turns out Hemsworth is a really good actor. He’s not just gorgeous, he’s funny. It’s [been] such a great second half of the MCU for him. I’m really, really happy that all came about.”

The crew is recovered from Comic-Con and we’re deep-diving into the newest must watch Amazon series and more. The Boys is officially binge-able, Once Upon a Time in Hollywood is the history lesson we all need, and the new Walking Dead series might already be dead – we’re tackling it all in episode 52 of #ComicBookNation! Make sure to subscribe now to never miss an episode!