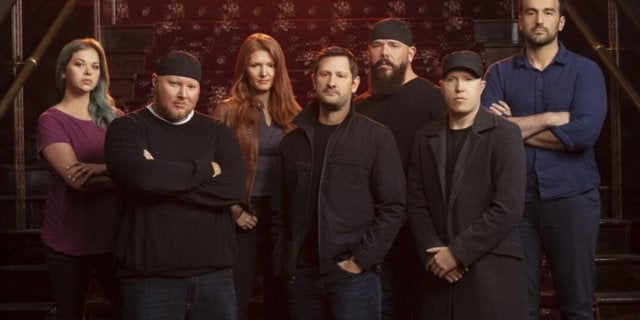 TV series like In Search of… and Unsolved Mysteries explored all manner of unexplained phenomenon, which never shied away from embracing the paranormal. In the 2000s, a series of shows emerged which featured investigations into otherworldly events, with SYFY’s Ghost Hunters becoming a seminal series in the realm of supernatural explorations. The series came to an end after 11 seasons, yet fans still can’t seem to get enough of their attempts to debunk reports of things that go bump in the night. A reboot of the series is set to debut in August, featuring original cast member Grant Wilson, which just got the above preview courtesy of Bloody Disgusting.

Per press release, “Fifteen years after introducing the world to the field of authentic paranormal investigation, Ghost Hunters returns to television on Wednesday, August 21st at 9 p.m. ET. The series that terrified and captivated fans for 11 seasons will follow one of the original team leaders, Grant Wilson, and his handpicked group of professional ghost hunters as they use their decades of field experience to investigate hauntings across the country. Engaging forensic experts, historical records and the most innovative technology available, the new squad will help everyday people who are struggling with unexplained supernatural phenomena.”

It adds, “The team is committed to discovering the truth to give relief to those plagued by paranormal activity and will follow the evidence they uncover wherever it may lead. The new crew working alongside Grant includes paranormal investigators Daryl Marston, Kristen Luman, Brandon Alvis, Mustafa Gatollari, Brian Murray and Richel Stratton. The series reboot has been greenlit for 20 episodes.”

While Ghost Hunters spawned countless imitators, one of the key facets of the series that separated itself from its successors is the team’s main goal was always to disprove reports of hauntings as opposed to attempting to convince viewers that various events were tied to the paranormal. Whether it be mysterious lights or bizarre sounds, the team would always attempt to find real-world explanations before assuming these occurrences could be blamed on supernatural visitors.

Tune in to the return of Ghost Hunters on August 21st on A&E.

Are you excited to see the series return? Let us know in the comments below or hit up @TheWolfman on Twitter to talk all things horror and Star Wars!

The crew is recovered from Comic-Con and we’re deep-diving into the newest must watch Amazon series and more. The Boys is officially binge-able, Once Upon a Time in Hollywood is the history lesson we all need, and the new Walking Dead series might already be dead – we’re tackling it all in episode 52 of #ComicBookNation! Make sure to subscribe now to never miss an episode!