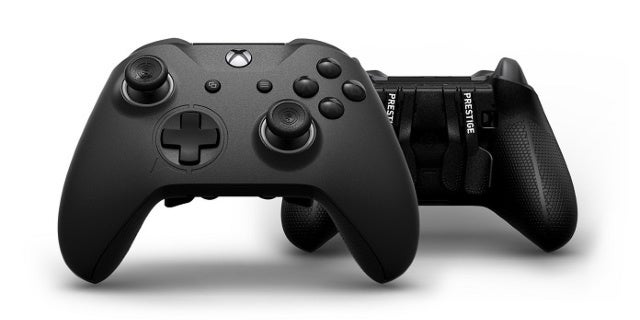 Scuf Gaming has entered another competitor into the Xbox One market with a sleek, customizable device called the Scuf Prestige. Compatible with both the Xbox One family and PCs, this controller comes with many of the bells and whistles those who prefer to be in total control of their gaming experience have come to expect from high-end controllers. It’s an impressive, comparable option to Microsoft’s own offering of Elite devices and really doesn’t have much worth complaining about. Considering the competing devices which are either available now or on their way though, it seems like the $160 Prestige controller’s main problem is that it’s coming into play a bit too late in the game with not enough features to face the competition.

That’s not to say that the Prestige is a poorly designed controller though – it couldn’t be further from it. After spending hours with the device, it’s a controller that should be considered by any Xbox One owner based on its merits alone. Four paddles grace the back of the device, ready to be configured for various inputs and remapped depending on which game you’re playing. Like most controllers of its kind, these paddles are the most noticeable feature and can be taken off or replaced as you get used to utilizing them. There’s certainly a learning curve associated with retraining yourself to use four more buttons on the back of a device, so the fact that the paddles are removable helps when it comes to working your way up to having two and later four extra options.

While not any noisier than clicking the right or left bumper, these paddles did feel perhaps a bit too flexible when handling them. The position of the paddles is preferable to the design of the Xbox Elite controller with the Prestige’s running parallel to the grips instead of perpendicular to them. Taking them off at times felt like the paddles were at risk of bending too far, though no issues were encountered when removing each of them aside from some uncertainty.

Configuring these paddles is no chore, though it’s still not as smooth a process as other devices. An electromagnetic key accompanies the device which, when attached to the back of the controller, allows players to set a command for each of the paddles. That’s all there is to it with only one extra piece to keep up, and the ease of that process is exactly why it almost seems picky to complain about what’s an incredibly simple feature. But when you consider how the paddles on an Xbox Elite controller can be customized by using the Xbox Accessories app and how Scuf’s own Vantage controller for the PlayStation 4 has a built-in switch that flips back and forth to set layouts, it’s a perfect example of tasting what could be and finding this hard to go back to.

The Prestige’s other customizable options like a removable faceplate and swappable thumbsticks go a long way in terms of getting the controller’s personalize look and feel just right. Popping off the faceplate and tinkering with the thumbsticks only takes a few seconds, and combined with the customizable hair triggers and trigger stops, you’ll have your preferred setup ready by the time your game loads. These features were particularly useful in fast-paced games like Gears 5 where players often snap their weapons up for quick shots and need to make the most of their mobility options. Again, it takes a while to get used to using all these features and breaking habits, especially if you’re used to longstanding button layouts from series as big as Gears of War, but the outcome is a rewarding one once you master even two extra paddles and varying configurations.

One feature that isn’t advertised quite as much but still stood out plenty is the grip on the back of the controller’s handles. A grip isn’t exactly a selling point that would put one controller over another, but it’s a feature that you’ll notice if you’re holding the Prestige for a few hours at a time. This grip is only available in black at the moment and can’t be removed, but just as it stays on the controller, your hand will stay comfortably on it without any unwanted slipping or sliding.

Had the Prestige and all its features debuted ahead of other high-end options, it would’ve been a shoo-in for a top spot among the elite devices. While it’s still an attractive option, it doesn’t have those one or two features which would put it above Microsoft’s own Xbox Elite controller that will run you a bit less at $150. The Elite device comes with three sets of thumbsticks as well as another d-pad option compared to the Prestige’s two sets and inability to swap out the d-pad. Setup is as simple as any traditional Xbox One controller and the Prestige removes the need for loads of batteries, and perhaps the Prestige will hold out longer in the long run than the Elite did when users complained of broken parts.

Caught between the applauded Xbox Elite controller and the Series 2 iteration of the device that’s on the horizon, the Scuf Prestige finds itself releasing at an awkward time. If you’re a die-hard proponent of Scuf devices or just want to get an extremely comfortable controller that’s customizable enough to satisfy pretty much any Xbox One user’s needs, the Scuf Prestige is a more than serviceable option. While we can’t yet know how the Xbox Elite Series 2 controller will feel until it’s in the hands of those looking for the high-end experiences these devices promise, it just seems prudent to wait for that $180 controller’s release if you’re already planning on shelling out that much. If it turns out to be less than you hoped for or you’re not so concerned with any additional features beyond what the Prestige boasts, pick up Scuf’s new controller and you won’t be disappointed.

The Scuf Prestige controller for the Xbox One and PC can be found through Scuf Gaming’s site. A review unit was provided by Scuf Gaming.