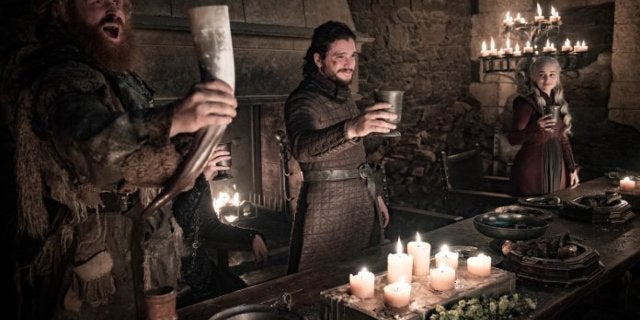 The discourse about the final season of Game of Thrones was derailed following the season’s fourth episode, “The Last of the Starks,” when fans noticed that a coffee cup was left in a shot in the episode. Despite being on screen for seconds, the coffee cup incident was talked about for days after the episode aired.

In a rare post-finale interview with Japan’s Star Channel, Game of Thrones showrunners DB Weiss and David Benioff revealed their feelings about the coffee cup mistake. “I think in Persian rugs it’s tradition that you make a little mistake when making the rug because only God can do anything perfect, so for us, I guess that just was ours,” Benioff says. Weiss chimes in, joking that “That’s why I put the coffee cup there… Conscious, concerted statement of our imperfection.”

Benioff then continues to speak about it in seriousness, saying, “We were concentrating so much on Daenerys and Jon Snow that we just didn’t see this coffee cup right in the middle. So, at first I couldn’t believe it, and then it was embarrassment, because how did we not see this coffee cup in the middle of the shot? And then, eventually, it was just kind of funny because this one is just a mistake, and it’s kind of funny to us now.”

HBO later edited the episode to remove the coffee cup from the shot. The channel also issued a tongue-in-cheek statement about the scene that stated, “The latte that appeared in the episode was a mistake. Daenerys had ordered an herbal tea.”

Benioff and Weiss also looked back at the entire decade they spent working on Game of Thrones. “To have it become what it became, and to be able to spend not one year or two years but more than ten years of our lives making it at this level, with the people we got to work with, all them, behind the camera…”, Weiss says.

“We didn’t have any idea that the show would be so big because when we first started going to Northern Ireland, where we shot the show, the customs officers would ask us what we were doing there,” Benioff adds. “We’d say ‘We’re working on this show…’ And they’d say, ‘What is Game of Thorns?’ And then, by the third season, we’d see the customs guys and — literally this happened in the Heathrow Airport — and the guy was reading A Game of Thrones, George [RR Martin]’s book, and we knew that something was starting to cross the threshold of public awareness.”

What did you think of this scene in Game of Thrones? Let us know in the comments.

(h/t Watchers on the Wall)