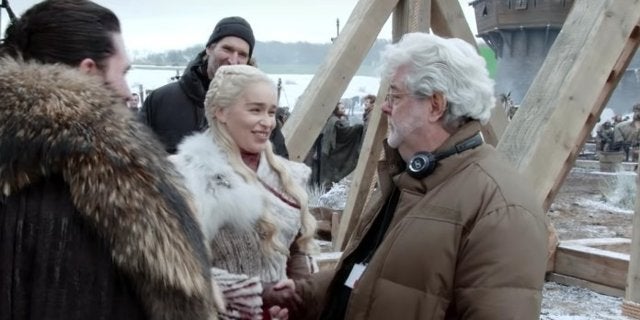 The cast and crew of Game of Thrones spend nearly two years working on the eighth season of the long-running fantasy series before it premiered on HBO TV. And though the fan reaction to the conclusion of the show was more than divisive, it still managed to tell a complete story that lasted nearly a decade on the premium network. A Song of Ice and Fire has become a part of the cultural zeitgeist much like the Star Wars saga, so it should come as no surprise that George Lucas himself stopped by the set of Game of Thrones to see the final season come together.

Game of Thrones showrunners D.B. Weiss and Dan Benioff participated in an interview with Star Channel when they addressed Lucas’ trip to the set and the influence he had on them as storytellers.

“George is, in a very real way, George built us. George is one of the major reasons we tell stories in the first place,” Weiss explained of the Lucasfilm creator’s influence. “And he saw all these steel girders on the outside of the set and he was looking at us and said ‘Steel? Aw, everything. We didn’t have steel on Star Wars, there was no steel. It was all plywood in Star Wars. Where did you get all this steel?’ I think he was jokingly making fun of us for having it so easy in making our show, and he had to put Star Wars together with spit and tape and glue.”

“He was lovely and remarkable,” he added.

After the season eight premiere of Game of Thrones debuted on HBO, a behind-the-scenes featurette went into detail about Lucas’ visit to the set and Benioff praised his guiding hand on the series, revealing that he helped direct some of the episode.

“When we found out that George Lucas wanted to visit, we thought maybe it was a practical joke. And then we were really excited and also nervous because it’s George Lucas,” Benioff explained. “The first time I can remember telling stories was me as a kid meshing together these little Stormtrooper dolls. He’s the one who started our obsession with this kind of epic storytelling.”

As director David Nutter explained, he received some assistance from Lucas in helming a scene.

Every season of Game of Thrones is now available to stream on HBO’s various digital platforms.