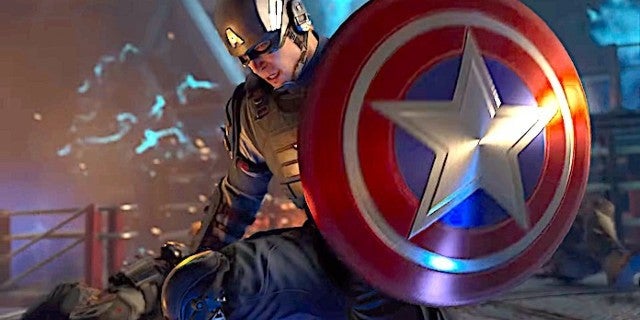 Earlier this week, Crystal Dynamics and Square Enix released a new Marvel’s Avengers PS4, Xbox One, PC, and Google Stadia video that focused on Captain America. The video was short, but it provided some basic background information on the Super Soldier, and also revealed a bit of gameplay. Fast-forward a bit, and the official Twitter account for the game has released a new video showing off more Captain America gameplay. Unfortunately, it’s gameplay we’ve already seen from A-Day demo footage that was released at Gamescom. However, some new details about the character have also been revealed.

More specifically, lead combat design Vince Napoli provided some brief words on the character, talking about Captain America’s combat style, and how he, if played properly, commands the battlefield.

“Captain America’s combat style is all about balance,” said Napoli of the character. “He has the widest variety of options at his disposal – something for every scenario. Playing Cap is all about reading the battlefield & choosing the right tools. This includes aggressively initiating combat with melee attacks designed to safely jump into the fray, ranged attacks that offer him precision-based crowd control, or utilizing a skill-driven parry & counter system that can turn the table on even the strongest opponents.”

Napoli continued: “Captain America played at his peak is effectively the owner of the battlefield, capable of holding back a large crowd of enemies from a distance, while simultaneously going toe to toe with the most powerful foes.”

Marvel’s Avengers is in development for PS4, Xbox One, PC, and Google Stadia. At the moment of publishing, there’s been no word of a Nintendo Switch port. However, we do have a release date. Barring any delay, the game will release worldwide on May 15, 2020.

For more news, media, and information on the game, be sure to take a quick gander at all of our previous and exhaustive coverage of the title by clicking right here.