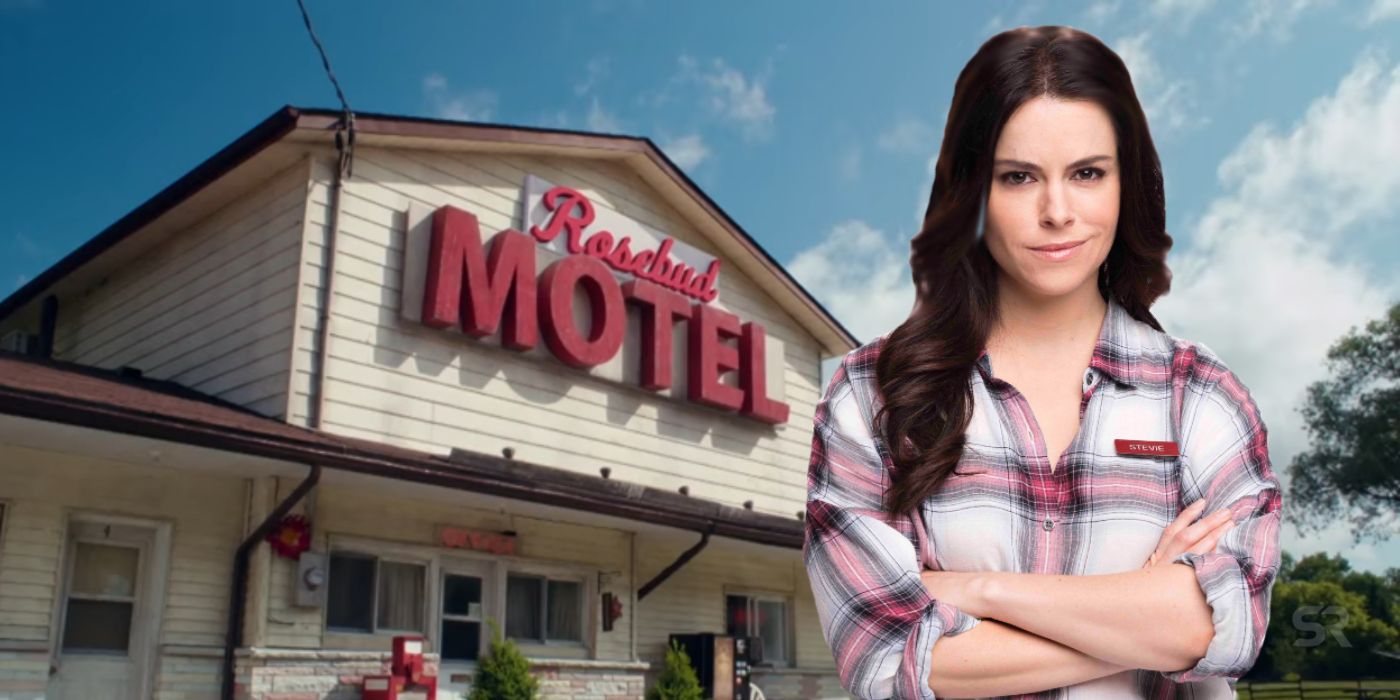 How did Stevie Budd become the owner of the local motel on Schitt’s Creek? The character, played by Emily Hampshire, serves as one of the lead characters outside of the Rose family. The Canadian sitcom is set to debut its sixth season in 2020, which will also be the show’s last.

Stevie was first introduced in the Schitt’s Creek pilot as the front-desk clerk of the Schitt’s Creek Motel. After the Rose family lost their wealthy fortune, they were forced to move to the small-town and live in the motel. When they arrived, they were met by Stevie’s deadpan sense of humor, a notable quality of her character. Stevie was often unenthusiastic about her job at the motel but it resulted in her bond with the Roses, especially David (Dan Levy).

Throughout the first three seasons of Schitt’s Creek, Stevie worked as the motel’s manager. In fact, she was the only one shown to ever work at the motel. In the season 3 episode, “New Car”, Stevie learned that her great-aunt, Maureen Budd, had passed away. Stevie took it very hard because she saw a lot of herself in Maureen, and that worried her. After handling the arrangements following Maureen’s death, Stevie learned that her great-aunt was the sole owner of the Schitt’s Creek Motel. Not only was she the proprietor, but she left the deed for Stevie in the will, making Stevie the new owner of the motel.

Stevie was already concerned that she was turning into her great-aunt and by taking over the motel, she felt like it was another step to the same fate. She was completely overwhelmed by the responsibilities that came with running that type of business. That was until Johnny (Eugene Levy) offered up his assistance. Despite the legal troubles that forced the family to move to town, Johnny was always known to be very business savvy. He was able to work out some of the financial and marketing initiatives while Stevie handled the day-to-day operations.

As the co-owners of the motel, Stevie and Johnny truly transformed the lodging option in the town of Schitt’s Creek. They gave the place a complete makeover and decided to change the name to Rosebud Motel, a combination of both of their last names. They also turned the motel’s reputation around, making it one of the best-reviewed lodging spots in the area. Stevie and Johnny were even invited to the Regional Hospitality Awards, aka the Hospies, and they won the award for the Best Customer Service in a Motel Under 20 Units.

Acquiring the motel might have been a burden for Stevie at first but it gave her a new lease on life. Stevie was clearly unfilled as the front-desk associate. By throwing herself into the co-owner role, she felt a greater purpose. It also brought Stevie closer to Johnny, who has become a father figure to her. Since she took on the new role, Stevie has noticeably evolved. She has stepped out of her comfort zone and continues to surprise those around her. Taking the lead role in Moira’s (Catherine O’Hara) production of Cabaret was just the start of the new Stevie. It will be exciting to see where the character goes next with Schitt’s Creek season 6.

Next: Where Is Schitt’s Creek Located?