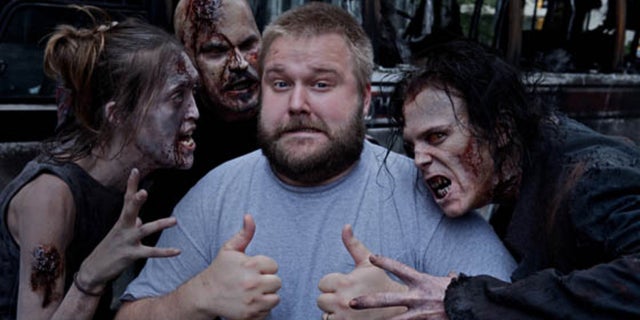 Robert Kirkman’s long journey with The Walking Dead is almost over. The creator is finding new ways to keep himself busy after ending the comic recently. Unfortunately, Kirkman might want to be more careful after he inadvertently injured himself with a box cutter. Of course, the replies are filled with fans urging him to be wary of infection because after all, this is how the zombie plague starts.

A couple of clever fans even went so far as to suggest amputating the limb. As readers know, in most zombie stories cutting that appendage off is the best way to ensure that you don’t fall victim to the disease. Kirkman will have plenty of time to think about better safety measures now that he’s not putting out the comic that he started all the way back in 2003. Still, it’s kind of surreal that the book is just over.

Pro tip: don’t open boxes with a box cutter on your lap… pic.twitter.com/IBhgsdZeYD

Kirkman ended the series suddenly with issue #193 about a month ago, and fans were completely blindsided. People rightfully wanted some answers about the decision, and the creator gave it to them in the form of a joke on Twitter. He ran out of space on his shelf for the growing number of hardcover editions. Volume 16 was just the straw that broke the camel’s back.

Frankly, Kirkman probably picked this time to call it quits because he wanted some measure of control over the story he began. The creator waxed fondly on the topic of ending things in July with a letter inside of the final issue. Kirkman’s letter offers clarity and honesty for all those who believed the creative team should have stuck it out for a little while longer.

“It breaks my heart that I had to end it, and we have to move on… but I just love this world too much to stretch things out until it doesn’t live up to what I want it to be,” Kirkman told his readers in that last fateful issue.

He concluded, “I got to tell my story exactly how I wanted to, for 193 issues, and end it on my terms, with no interference at all along the way… at any point. That’s such a rare thing, and it doesn’t exist without the unyielding support this series got from readers like you.”

No one could have imagined the heights the series would travel to throughout its run. Kirkman even ended up killing the story’s main character, Rick Grimes. He had promised that Grimes wouldn’t be around till the end of the comic, but people really didn’t think it could be done until they saw it on the page. Carl grew old with Sophia and things just kind of kept moving on as he had a family of his own. Time just keeps moving on, and that’s what fans can look forward to in the TV show. Even though progress continues, maybe Kirkman should exercise some caution in all that newfound freedom he has.