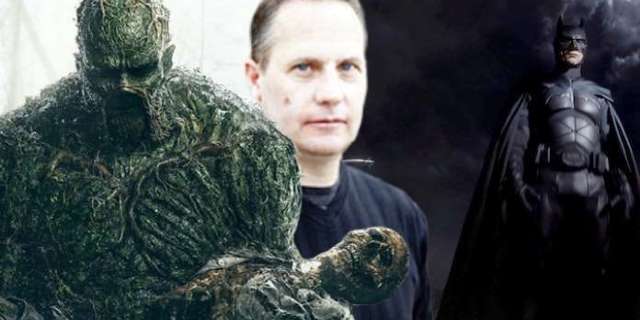 Like many visual effects houses, CoSA VFX have had their hands on dozens of popular properties — including movies and TV series that most of our readers have almost certainly seen — and done so without the audience learning their names. Per the company’s website, they have worked on Gotham, Swamp Thing, Pennyworth, NOS4A2, Marvel’s Agents of S.H.I.E.L.D., Westworld, Stranger Things, the Lethal Weapon TV series, The Conjuring 2 and Guardians of the Galaxy. Even before that run, founder Tom Mahoney had work in genre, ranging from his time on Star Trek: The Next Generation to Final Destination and Exorcist franchise films.

Mahoney joined ComicBook.com recently for a chat about how he ended up here, what the biggest challenges are for a VFX house, and the unique challenges of working on comic book and superhero projects that demand a wide variety of effects shots.

Would you say that most of your time is spent on big, ambitious, VFX-heavy projects or on smaller things that people might not “spot?”

I think it would depend on if you look at it in which way. Like in terms of shot counts, I think that we’d probably lean towards the fix-it shots because there tend to be a lot of those.

But in terms of time you end up putting a lot more time into the bigger, more complicated shots. My guess is — I mean this is just a finger-in-the-wind kind of guess — I would say that it’s probably about 60, 65% the very difficult shots, and then 35, 40% the fix-it shot, depending.

But if you look at it from a time point of view, doing a very complex matte painting, maybe with a creature or something like that, can take weeks. So to answer your question in two ways, in terms of volume, it’s probably the fix-it of jobs. But in terms of complexity, I’d say that we’d probably spend a little more time doing the big stuff.

You’ve been around COSA since the start. As the workload has grown, how has it changed the way you and your team have to approach things?

Every show, and sometimes every episode of every show offers these different unique challenges. And you know, honestly, sometimes they’re terrifying. Like, “We’ve never done anything like this before, but we’re going to figure it out.” That’s a big part of our job is trying to be presented with problems and find solutions that are going to work a lot of times in the most cost effective way, or figuring out ways to do things that just can’t be done on set.

So I think that it’s a matter of approach is yes, we do have to expand depending on the amount of work. But I think really it’s finding the solution first, and then figuring out the artist power and you need to get it done after the fact. So I mean honestly I think what a lot of people do in most industries, but for us in particular is finding solutions to very unique problems.

This feels like a really specialized gig that you have to have some decent money to even attempt. What got you into it originally?

Like most things. I kind of found my way into it in a weird way. Initially in high school I got more into video production. I went to a school for communications, Emerson College in Boston. Really my beginning of visual effects happened in my senior year when I did an internship with a show that some people may be familiar with called Star Trek, The Next Generation, and that was in the fourth season of Star Trek: The Next Generation, and I interned in the post production side and spent a lot of my time with the visual effects crews.

They actually used to have two teams that alternated episodes and they were full of like some great, there was Rob Legato and Gary Hutzel were one team, and Rob Legato has gone onto win Academy Awards. Gary Hutzel went on to work on Battlestar Galactica as a VFX supervisor. He unfortunately passed away a couple of years ago. And then on the other side was this guy named Dan Curry and Ron Moore, not Ron Moore of Outlander fame. He just happened to have the same name and work on Star Trek. But Dan Curry stayed on as the visual effects supervisor for all of the Star Trek series and so did Ron. Ron Moore worked with them the whole time, so it was great working with those guys. They were at the top of their game when I was their intern. And that was when I got the bug bitten.

There are obviously going to be fairly simple pitches, but how do you go about trying to get a job like Swamp Thing?

I think it’s like a lot of other fields is that people don’t want to use you unless you’ve done exactly what they’d want before. So to a degree, it’s a matter of making sure that you can show them that you’re capable of doing what you’re doing. But the flip side is true, is that you have to do it the first time even as a company. And so a lot of times you do just one or two shots that can prove that you can do it before you can then go to the next show and move up to doing something a little bit more complicated.

It’s always great if you as an artist or as a company in our case are a little bit afraid of your next project, because that fear kind of motivates you to push your boundaries and do more, do different things, try new approaches.

Swamp Thing was an example of that. We had done similar work, but not on the scale that we needed to do it in Swamp Thing. And so yeah, as a company we were a little afraid. We weren’t afraid we couldn’t do the work. We were just kind of, it was a scary proposition going into it. And you know, I’d like to think that we did a pretty good job and it seems like everyone was happy with it and unfortunately it didn’t get a second season. But think from a visual effects standpoint, I was pretty happy with where we landed.

When you look at something like the Justice League “mustachegate,” does that impact how you guys approach the next similar job you have to do, even though it wasn’t your mistake?

I mean, I feel like it hurts everybody. You know, you see those, the things on YouTube, they’re reels of why CGI is bad, but conversely there are reels that say, “You think you hate CGI but there’s all these good CGI.” So people hate bad visual effects. I get it. That can happen. There’s just so much visual effects we’re bound to have some bad visual effects out there.

And as I said before, there are all sorts of factors that can lead into that. It’s not always a product of the visual effects company that did it doing bad work. They could’ve been painted into a corner by constraints placed on the production constraints placed on the budget. Constraints placed on a lot of things. You know, the Superman lip thing, I don’t know the backstory to that. I have no idea what the company was up against trying to fix that. It may have been a last minute thing and they only had so much time to do it.

So I never want to second guess what somebody else was up again, because there’s definitely been moments that we’ve had to let go of shots that I wasn’t 100% proud of. I wish I could be. But you know there are definitely moments when you have to let something go just based on the client’s wishes, or you’re out of time. We are a deadline oriented industry. But I don’t think it’s good for the visual effects industry as a whole when there are bad visual effects out there. So people notice the bad, they don’t tend to notice the good.