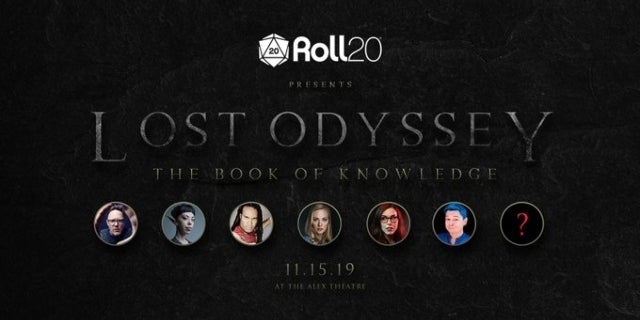 A star-studded Dungeons & Dragons show will be taking place in November to benefit the Autism Society of America. Daredevil actress Deborah Ann Woll will lead an all-star party of Dungeons & Dragons players in Lost Odyssey: The Book of Knowledge, a live D&D experience being held to raise money and awareness for the Autism Society of America. Joining Woll are actors Matthew Lillard and TJ Storm and internet personalities Satine Phoenix, Kate Welch, and Xander Jeanneret. The group will also be joined by a to be announced mystery guest. The event will take place at the Alex Theater on November 15th with tickets running from $29 to $179 depending on seat location.

Attendees of Lost Odyssey will also get a ton of great swag, including a free 1-year subscription to the virtual tabletop service Roll20 and an exclusive DLC pack for the D&D game Neverwinter. Those who can’t attend can still watch a livestream on Twitch and donate for a chance at thousands of giveaways, with all donations going to the ASA. A production team will also be working on a documentary for the event, with attendees encouraged to come in-costume.

Woll is a well-known Dungeons & Dragons enthusiast and has appeared on shows like Critical Role and was the Dungeon Master for Relics and Rarities, a D&D series produced by Geek & Sundry. Woll is a fantastic storyteller and DM, so Lost Odyssey should be a great live experience.

You can find out more information about Lost Odyssey by going to their website. Tickets are currently on sale, with an early bird discount available until October 16th.