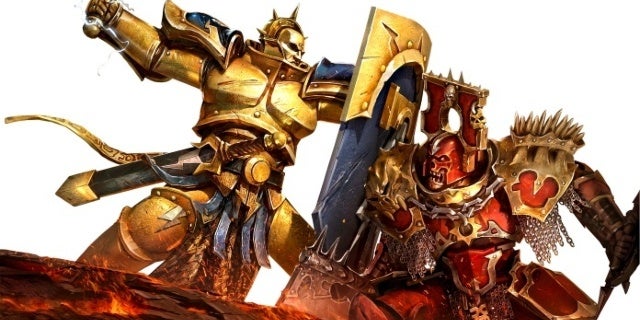 Marvel Comics and Games Workshop have revealed that the two companies have teamed up to publish comics based on the extremely popular Warhammer line of tabletop games. What, exactly, those comics might look like, which creative teams they might employ, and which pocket of Warhammer continuity they might explore remains unclear, but one thing is for sure: they are coming.

“Marvel Comics are the name behind many of the world’s best-loved super hero characters (you know, like Spider-Man, the Avengers, the X-Men, and the Fantastic Four),” Games Workshop stated as part of announcing the news. “With more than 80 years of comics experience, Marvel has built an amazing reputation for bringing together the best comic book writers and artists to forge stories that span generations. It’s not for nothing that Marvel has cemented itself as a household name.”

Dive into the expansive universe of “Warhammer” as Marvel and Games Workshop team up to create “Warhammer” comics, out fall 2020! https://t.co/nRUmivHvIN

Prior to the deal, Titan Comics held the license to Warhammer comics, with the final series being Warhammer 40,000: Deathwatch late last year. At the time, it was reported that Titan had lost the license, but no official statement was made from either side, but there were reportedly creative problems between the two comics, and publishing deadlines regularly slipped.

“I can’t tell you how excited we are about diving into the depths of the expansive universes of Warhammer,” Marvel editor Mark Basso said as part of the press release announcing the deal. “At Marvel, we’re no strangers to telling deeply character-focused tales set in an interconnected world of stories, and fans are going to love what we’re already starting to cook up with the Games Workshop team for the Warhammer comics.”

What do you think about the deal between Marvel and Games Workshop? Are you excited to check out Marvel-published Warhammer comics? Let us know in the comments, or hit me up directly on Twitter at @rollinbishop to talk all things gaming!

At this point, no exact titles or creative teams have been announced for the upcoming Warhammer comic books, let alone a firm release date. That said, New York Comic Con is this coming weekend, and there’s every possibility that some of what Marvel and Games Workshop have going on could be revealed there. You can check out all of our previous coverage of tabletop gaming right here.