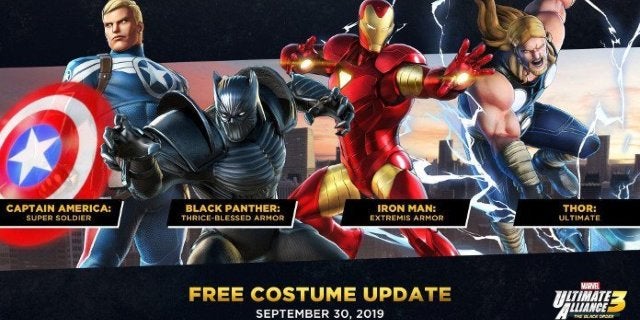 The first DLC pack for Marvel Ultimate Alliance 3: The Black Order launches today. The Marvel Knights: Curse of the Vampire DLC adds The Punisher, Blade, Moon Knight, and Morbius to the game’s list of playable characters, as well as two new play modes. Also, Nintendo released a free costume update adding new costumes for four already playable characters in the game. Captain America, Black Panther, Iron Man, and Thor each get new looks. For Captain America, it’s the Super Soldier costume. Black Panther gets his Thrice-Blessed Armor. Iron Man gets his Extremis Armor. Thor gets his Ultimate Marvel look. Take a look at all four below.

This is the second free costume update that Nintendo has released for Marvel Ultimate Alliance 3. The first update added Captain Marvel’s classic Ms. Marvel costume, Spider-Man’s symbiote costume, and Hulk’s Planet Hulk gladiator look. The Curse of the Vampire DLC added new alternate colors for those costumes in the new SHIELD depot storefront, which takes in-game currency. Ms. Marvel’s costume can be made all-white. Spider-Man’s symbiote costume can get a red and gold coloring that makes it resemble the Iron Spider costume. Gladiator Hulk can be turned into gladiator Red Hulk.

The Marvel Knights: Curse of the Vampire DLC adds the new Gauntlet mode to the game, which presents players will a series of co-op challenges with leaderboards. There’s also Nightmare mode, which allows players to replay the story with new types of enemies. The two remaining installments of paid DLC will focus on the X-Men and the Fantastic Four, respectively. Nintendo has not yet revealed release windows for either of the remaining DLC packs.

ComicBook.com gave Marvel Ultimate 3: The Black Order high praise when the game released in July. From the review, “The scope of Marvel Ultimate Alliance 3 is impressive. The story is all about fan service, but its fun, enjoyable fan service. The game is fun solo, though multiplayer is ideal. The drop-in, drop-out multiplayer makes that a breeze, and the Switch’s portability and connectivity make it easy to find opportunities to play. Marvel Ultimate Alliance 3 is a grand, action-packed celebration of the Marvel Universe that fans won’t want to miss out on.”