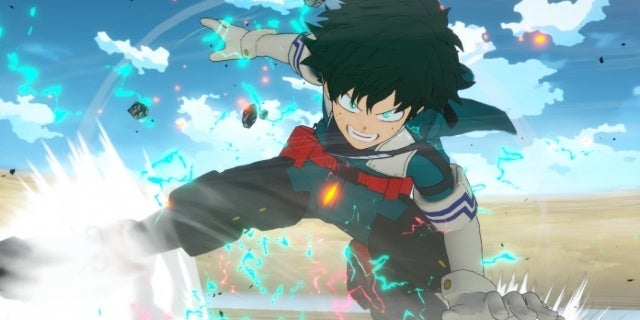 The My Hero Academia franchise appears to not be letting up when it comes to video games. After initially being revealed through a magazine scan, My Hero One’s Justice 2 has been confirmed to launch in 2020. The video game appears to be a direct sequel to My Hero One’s Justice, and will reportedly include the original game’s battle system while bringing in more characters than before — such as Overhaul, the villain with the Quirk that can, well, overhaul things.

The brief teaser, which you can check out above, does little more than introduce the fighter between Overhaul and Deku, the franchise’s protagonist. Even so, it certainly sets the stage for more to be revealed later this week at New York Comic Con. As it stands, the only fighters mentioned in conjunction with My Hero One’s Justice 2 are Deku, Overhaul, and All Might. There are several additions that might make sense, especially if the game is set to take on the events that are expected to be depicted in Season 4 of the anime series, but we will just have to wait and see at this point.

Grab your gear because class is back in session, heroes! Here’s a first look at MY HERO ONE’S JUSTICE 2!

Are you ready to take your quirks to the next level? Go beyond! PLUS ULTRA!! #MHOJ2 pic.twitter.com/VBofraffzo

What do you think of what My Hero One’s Justice 2 looks like so far? Are you excited to check it out when it releases next year? Let us know in the comments, or hit me up directly on Twitter at @rollinbishop to talk all things gaming!

Here’s how Bandai Namco describes the original My Hero One’s Justice on its website:

“Whether you want to see the destruction of humanity or believe heroes should defend those in need, fight to prove your justice in MY HERO ONE’S JUSTICE. The popular Weekly Shonen Jump manga series comes to life, as players experience the abilities of fan favorite characters such as Izuku Midoriya, Katsuki Bakugo, Tomura Shigaraki, and many more in this arena brawler, where you’ll get to choose between hero and villain in your path to justice.

“Utilize Quirks and call upon your side-kicks to activate powerful attacks where your environments are at your disposal in total field destruction. The battle doesn’t just confine you to the ground – take the fight upwards where buildings and walls become a part of the action.”

My Hero’s One Justice 2 is set to release for PlayStation 4, Xbox One, Nintendo Switch, and PC in 2020. An exact release date, let alone roster, has not yet been announced. You can check out all of our previous coverage of the My Hero Academia franchise right here.