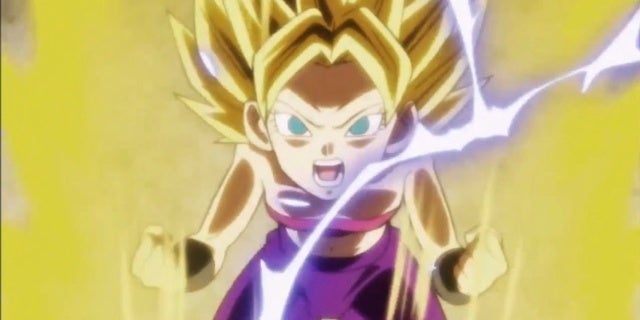 The Dragon Ball franchise is sitting at a major crossroads right now, while the Dragon Ball Super anime is on hiatus, with the next step still yet to be revealed by Toei Animation. In the interim between Dragon Ball‘s past and its future, fans have been speculating about where the franchise can go – and debating where it should go. One of the biggest talking points is whether Dragon Ball is ready for spinoff series that could widen the franchise’s reach. We’ve already broken down why Dragon Ball characters like Goku, Vegeta, and Gohan are ready for spinoffs, but there’s another fan-favorite character that’s been nominated: Caulifla!

So should Caulifla get her own Dragon Ball spinoff series? Let’s break it down:

We met Caulifla during Dragon Ball Super‘s final story arc, “Universal Survival”. Caulifla is a female Saiyan from Universe 6, the twin universe of Goku and Vegeta’s universe 7. Caulifla was recruited by Vegeta’s young Universe 6 Saiyan protege Cabba, to fight in the galactic Tournament of Power. Caulifla showed massive power potential when she made the jumps to both Super Saiyan and Super Saiyan 2 during the tournament, faster and more powerfully than Goku and Vegeta ever did. Caulifla also showed leadership potential, helping to corral her “sworn sister” Kale, when Kale’s Berserker Super Saiyan power erupted; not to mention nearly besting Goku in the ring. Between her punk look, badass swagger, and unique power, Dragon Ball fans have every reason to want to see more from Caulifla.

But is Caulifla a good enough character to support an entire series? Well, right now Dragon Ball Super has left things in a place where Caulifla, Kale, and all of Universe 6 have gotten a new lease on life. Android 17 won the ToP and used his Super Dragon Ball wish to bring back all of the universes that were erased in the tournament. Based on her experience in the tournament, Caulifla has committed to tapping into her true Saiyan potential, after seeing what Goku and Vegeta are capable of. Moreover, Universe 6’s Saiyans are (as stated) a much more noble and heroic race of fighters than their Universe 7 counterparts; between the second lease on life, and the example of Universe 7’s Saiyans to follow, Caulifla, Kale, and Cabba have all the motivation they need to become universal protectors.

So there you go: A Dragon Ball spinoff centered on Caulifla already comes with rich character arcs, plus a premise that inherently allows for some exciting and action-packed story arcs.

For their parts, the English Dub actors who play Universe 6’s Saiyans have openly stated they want this spinoff to happen:

“High-key want a spin-off with Cabba, Caulifla, and Kale,” actress Dawn M. Bennett tweeted. “They’ve become so much more supportive of each other as friends since the Tournament started. Love the character growth.”

Dragon Ball Super Goku voice actor Sean Schemmel also voiced his belief that the franchise needs spinoffs – check that out in the video above!