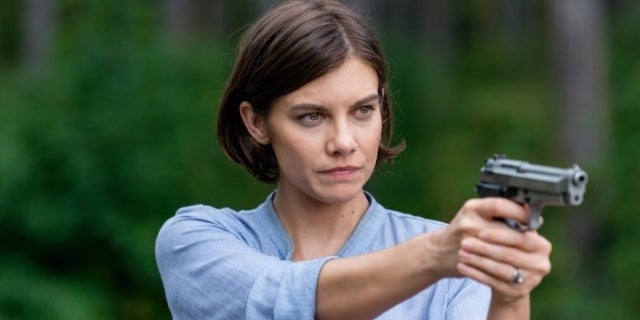 The Walking Dead showrunner Angela Kang hints audiences might see Lauren Cohan’s Maggie Rhee “at some other point this season,” before Cohan officially returns as a series regular in Season 11. Cohan stepped away in Season 9 alongside exiting Rick Grimes star Andrew Lincoln when she boarded Whiskey Cavalier, ABC’s spy action-comedy cancelled before the end of its freshman season. But Cohan and Kang, alongside brand chief content officer Scott Gimple, maintained Maggie would be returning to TWD Universe: as recently as September, Kang admitted the zombie drama was “trying to work on” bringing Cohan back. A month later, during New York Comic Con, Cohan revealed she is officially headed back to Hilltop.

“We may see her at some other point this season, but I don’t want to say too much about anything,” Kang told EW. “Maggie is a character that I’ve always loved writing for on the show. She’s a character that I thought was just so much fun in the comic book.”

Both Cohan and Kang joined The Walking Dead in its sophomore season in 2011. Knowing Cohan would eventually return to the series, Kang peppered references to the away Maggie in Seasons 9 and 10: first in the Season 9 finale and again in the Season 10 opener.

Siddiq (Avi Nash) revealed Maggie was off someplace far assisting Georgie (Jayne Atkinson) with a new community. How Maggie re-enters the story remains to be seen, but she hasn’t been forgotten despite spending more than six years away in-universe.

“The idea that Maggie’s kind of out there in the world up to things and that they’re thinking about her has been seeded in for a while,” Kang said. “So she’s definitely on our characters’ minds as they’re dealing with all this stuff going on and realizing that some of the people that are really capable and wonderful that they love are just out there and inaccessible to them at the moment.”

Cohan’s co-star Josh McDermitt, who plays Eugene, admitted Cohan’s absence left a “Maggie-shaped hole” in the cast and the story. Now the cast and crew are excited to have her back.

“I personally love LC so much. She’s just such a warm, wonderful, funny presence around the set. We’ve been saying for a while that the goal was always to figure out when we can continue her story, and there were a lot of logistics that needs to be worked out,” Kang added. “Maybe it felt like to fans nothing was happening and it was all lies. But behind the scenes there have been conversations all along, and so I could not personally be more excited that it all is finally worked out. It’s going to be some fun stuff.”

For her part, Cohan is anxious to uncover Maggie’s new chapter. Co-star Jeffrey Dean Morgan, who plays Negan — the since-reformed ex-Savior leader responsible for the murder of Maggie’s husband Glenn (Steven Yeun) — expects “some sort of confrontation, or ten” when Maggie and Negan next come face-to-face.

The Walking Dead Season 11 is expected to premiere on AMC in October 2020.

New episodes of The Walking Dead Season 10 premiere Sundays at 9/8c on AMC. For more TWD intel, follow the author @CameronBonomolo on Twitter.