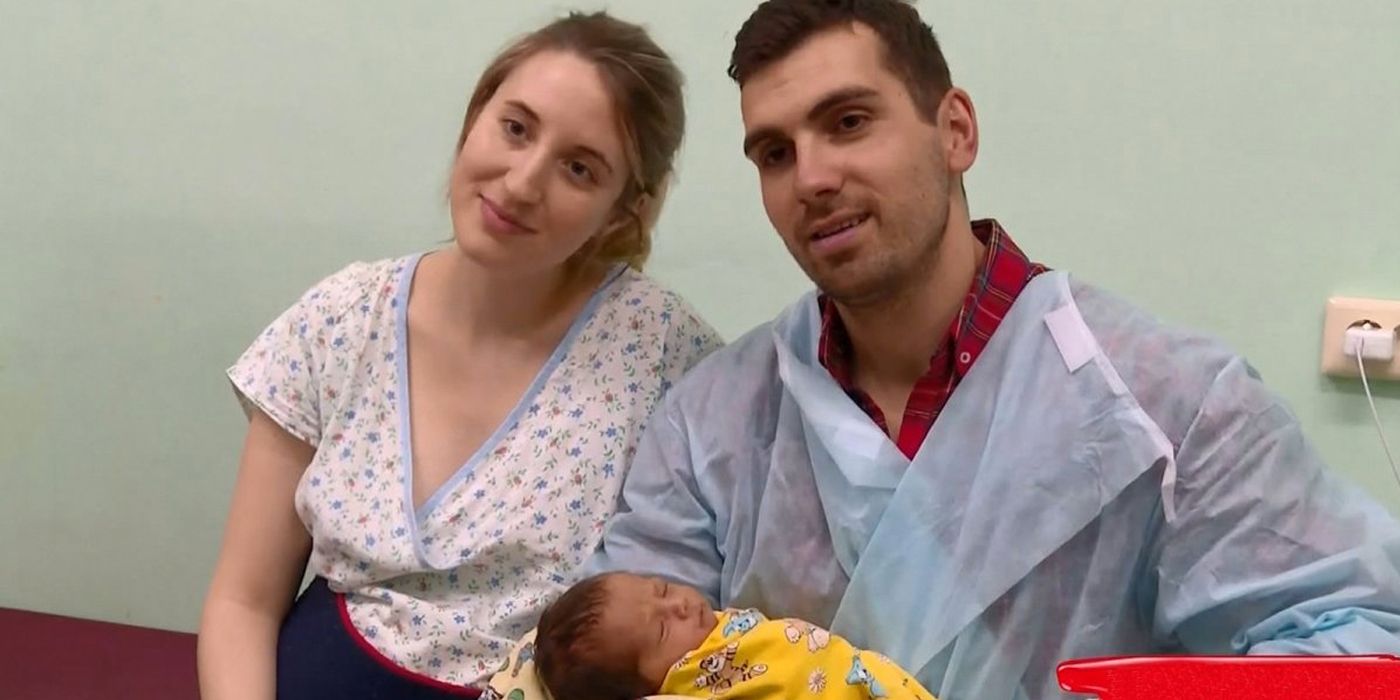 On the latest episode of 90 Day Fiancé, Sasha admitted to Emily’s sister Betsy that all three of his marriages have begun from pregnancy. Betsy, who is rightfully suspicious about how Sasha’s relationship with Emily will be different, didn’t mince words about what she thought about her being with her sister.

Emily is an English teacher who hails from Portland, Oregon. The self-professed one-time party girl met and fell in love with personal trainer Sasha while working abroad in Russia. Emily admitted that she was starved for human interaction in his country prior to their meeting due to not being able to understand Russian. So the two began talking at the gym and even helped tutor him in English. However, it was revealed early on that Sasha has two children from his previous marriages. Emily became pregnant fairly quickly in their relationship and their baby was born in Russia via emergency c-section. The two have since moved to America and are living with Emily’s sister while they get on their feet.

Sasha hasn’t been the ideal guest at Betsy’s house, as he’s been criticizing the sugary cereals and treats that she has in her house and even went as far as to start throwing away unopened food from her cupboard. Needless to say, fans have been watching the interactions and are starting to see red flags in Sasha’s controlling behavior and in his past. It was revealed this week that Sasha has a pattern when it comes to how his marriages start. Betsy, Emily’s mother, and Sasha are having dinner together and the conversation turns down a controversial path after Betsy had a few glasses of wine and is eager to talk to Sasha about his relationship with her sister. Betsy asked him “When you had your other babies, were you already married to their mothers? Or did you get pregnant before the marriage each time?” Sasha replied sheepishly, “Yes. Before.” Betsy was shocked, “Before each marriage?” He explained the pattern that he’s repeated three times now, saying, “They got pregnant and they will [sic] marriage and then the baby.” Betsy said, “So that’s the pattern, then. Baby, marriage, baby, marriage.”

Sasha said he understands why Betsy is so incredulous of his motives, he says that she’s entitled to her opinion, but they’ve only known each other for four days and to give him a chance. She told him that while it seems he’s got the baby and marriage part down, he doesn’t have the marriage part down. Sasha continued to explain that he knows that though he realizes that he has had two past marriages that have ended with the result of finding another woman, and getting her pregnant. Betsy continued to poke at Sasha, asking him how soon until “Emily’s expiration date” is up. That’s when Sashas revealed that his past two marriages ended because of a lack of respect on the wives’ side.

However, Sasha maintains confident that this marriage is different from the last two, regardless of how the pattern looks to outsiders. He’s sure that Emily is different and she makes him happy. Fans will have to watch and see if the third time is really a charm.

Next: 90 Day Fiance: Anna Kicks Mursel Out of Her House Following Breakup

Julia Odom is one of Screen Rant’s reality TV news writers and editors. She hails from the Rocky Mountains of Grand Junction, Colorado where she grew up with her seven siblings. She spent the time after college making music, as a singer and lyricist for her band Carface. She can be found most weekends watching her guilty pleasure – 90 Day Fiancé – with her four sisters. When she is not writing for Screen Rant, she is contributing to websites such as Better Humans and Craft Your Content. She is a coffee aficionado and film lover, with her favorite films being from Kubrick and PTA. Spending over a year in France as an au pair, Julia enjoys experiencing life at the edge of her comfort zone. Some of her loves include her two cats, reading Stephen King, and eating spicy food.