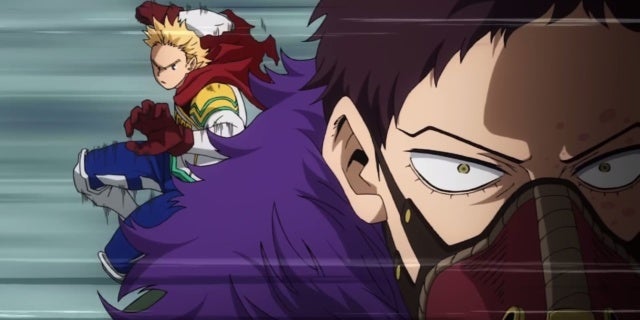 My Hero Academia continues to stun fans with season 4 of the anime, and the latest episode has generated some of the biggest buzz of the entire season, thus far. Episode 11 (or 74 overall) saw Mirio leading the Hero / police charge into the Yakuza base of Shie Hassaikai, with the U.A. all-star hell-bent on rescuing the young girl Eri from the sadistic hold of Shie Hassaikai underboss, Kai Chisaki. It’s no spoiler to say that the confrontation between “Lemillion” and “Overhaul is one of the most epic we’ve seen in My Hero Academia – because now you can confirm it with your own eyes!

Check out this video clip of the epic Lemillion vs. Overhaul fight that My Hero Academia season 4 just blessed fans with:

#MyHeroAcadamia
MHA will always be a unique series! The way they articulate key emotions , and posses the ability to make them 10x better.

Fans of the My Hero Academia manga have known this tragic moment was coming for some time, but the anime fandom is now going through it. Poor Mirio discovers that he’s not only facing Chisaki, but his two henchmen Deidoro Sakaki and Shin Nemoto as well. The two henchmen try to break Mirio physical and mental well (respectively), but when the young hero presses forward, he and Chisaki have an epic battle.

It turns out that Overhaul’s ability to deconstruct and reconstruct matter has been honed by the villain into a quick and devastating attack method – but he find that Mirio has honed his own troublesome phasing quirk to an even finer point. Against all odds, Mirio bests Overhaul in straight out combat through will alone – so the villains cheat and shoot him with one of their quirk-killing bullets, using Eri as bait.

Mirio, ever the hero, makes the ultimate sacrifice.

My Hero Academia was created by Kohei Horikoshi and has been running in Shueisha’s Weekly Shonen Jump since July 2014. The story follows Izuku Midoriya, who lives in a world where everyone has powers, even though he was born without them. Dreaming to become a superhero anyway, he’s eventually scouted by the world’s best hero All Might and enrolls in a school for professional heroes. The series has been licensed by Viz Media for an English language release since 2015. My Hero Academia also launched its second big movie, Heroes Rising, in Japan this month.