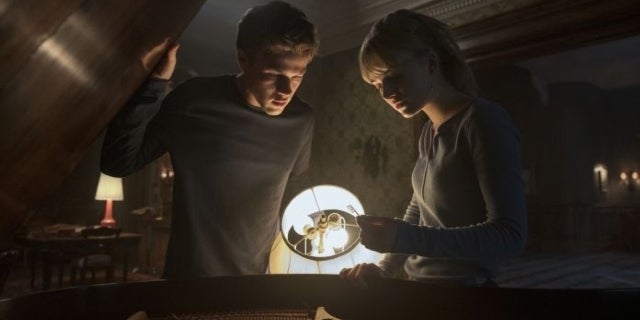 After gestating 10 years within its own development hell, Netflix finally bets the house on Locke & Key, letting fans see why it has been one of the most desirable independent comic book adaptations of the past decade. Luckily for the superstar streamer, the wait has been well worth it.

Much like the comic series that serves as inspiration, the Netflix show finds the Locke family forced to move into a family property known as Key House after a horrific family tragedy. Unbeknownst to the Lockes, the house has a sinister past that’s slowly uncovered by the Locke siblings — Tyler, Kinsey, and Bode.

Locke & Key is an incredible genre-bending show that has all the makings to become Netflix’s next big thing. While it does remain rooted in the world of horror, super heavy or dark tones aren’t to be found anywhere throughout. That doesn’t stop the show from being spooky and downright unsettling at times, sure to sprinkle in very few jump scares in the initial batch of ten episodes.

There’s a certain sense of naiveté to Locke & Key that isn’t found on Netflix’s other properties. The expertly-cast Locke family brings a playful aura to the show that’s both welcome and necessary. It’s here you realize why Jackson Robert Scott (Bode Locke) is the only actor that’s been part of multiple iterations of Locke & Key. A favorite of the IT filmmakers Andy and Barbara Muschietti’s — we’re talking about Georgie, after all — Scott’s role here has superstar status written all over it. The actor’s cheerfully youthful delivery is superb and will most certainly lead to a handful of viral reaction GIFs in the first episode alone.

The naiveté of it all is a huge part of making this a return to form for Netflix’s binge-watching format. While it deals with traumatic experiences at times, it’s never too heavy, largely attributable to Torin Borrowdale’s magical score. It allows the show to be a perfect blend of Stranger Things and the world of Harry Potter with a little Riverdale and Doctor Strange sprinkled in.

Speaking of Doctor Strange, it only takes two episodes before you realize why former Strange helmer Scott Derrickson was once interested in directing the series — there are times the mysteries of Key House play exactly like a horror-based Strange flick. The use of clever set construction and production design allows for a handful of blockbuster-level sequences that boost the show to another level, though that might be where fans of the comic series might start getting lost. The show by and large upsets the narrative of the comic series from Joe Hill and Gabriel Rodriguez. The characterizations and plot devices remain for the most part, but instead of diving heavily into the horror and trauma, it largely remains an excellent mix of lightheartedness and uneasiness.

The rest of the Locke family, from Emilia Jones’ Kinsey to Connor Jessup’s Tyler and Darby Stanchfield’s Nina, are very strong throughout. Of the batch, Jones has the strongest development, making Kinsey one of the strongest characters. The two-headed antagonistic team of Dodge (Layla De Oliveira) and Sam Lesser (Thomas Mitchell Barnet) is something that adds to the uneasiness of it all. From the first moment you see her, De Oliveira’s Dodge teaches a masterclass in the ominous, allowing the domination of every scene she appears in, even when popping up at the most inopportune times.

On the other hand, Barnet’s Lesser starts off as a one-dimension baddie we’ve all seen a thousand times before. By the time the character’s last scene comes, however, it’s one of the strongest performances of the entire series. In fact, there’s a bit set to musical act flora cash’s “You’re Somebody Else” that dissects this massive fantasy world and suddenly, everything feels real and human. Between the score and master usage of a soundtrack, music lovers shouldn’t have any issues here.

Locke and Key isn’t a perfect adaptation of the comic series, something that might be for the better in this case. Instead of going full-on horror, it’s apparent Netflix wanted to cast the widest net possible and get fans from all walks of life. After all, there is a little something for everyone here.

The show has its issues and struggles with a few pacing hiccups late in the season after some needed exposition and origin tales pop up too late. Every scripting shortfall is overshadowed by the cast’s strong delivery and line reads. Even then, this show makes an iron-clad argument on why it should be one of Netflix’s flagships moving forward, even more so in a world of cluttered comic book adaptations. At the very least, the streamer has made something well worth the wait, provoking a strong desire for more.

Season One of Locke & Key lands on Netflix on February 7th.