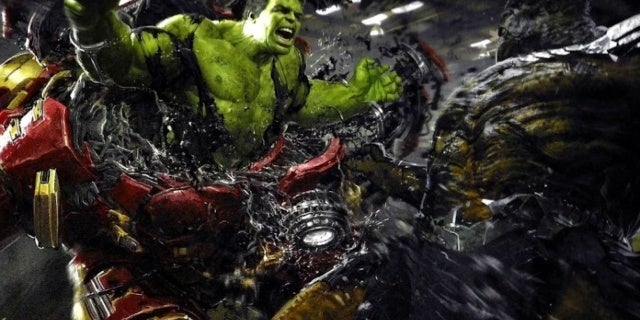 Avengers Endgame is now the highest-grossing movie of all time, and you’d think that by now fans had dissected every single frame of it for Easter eggs, deeper themes, and other such insights. However, the release of Marvel’s The Infinity Saga Box Set has revealed some unique extras and special features that are still coming to light. Today, one Marvel fan has posted a new Avengers: Infinity War deleted scene, which reveals the originally-planned moment when Bruce Banner and Hulk would’ve merged into Smart Hulk, during that film. It’s a moment we’ve heard about before, but seeing it is something else, altogether.

Here’s how Avengers: Infinity War would’ve introduced Smart Hulk via Corvus Glaive’s duel with Banner in the Hulkbuster Armor, during the Battle of Wakanda:

[This all happens inside the suit in the “helmet-cam”]
Banner: “Big Guy, I know we’re having some issues here but if you’re gonna appear at any moment now would be a good time”
Hulk: “No! Banner only want Hulk for fighting!”
B: “So what? You like to fight!”
H: “Banner hate hulk!”
B: “I don’t hate you! You’re more of an Avenger than I am. I love you!
H: “No you don’t! Hulk just wanna live!”
B: “I wanna live too, man! I wanna live too!”
H: “Me too!”
B: “So let’s live. We’ll live and let live!”
H: “Live and let live!”
B: ” Okay I got an idea.”
[Corvus goes in for the final blow, Hulk’s hand emerges from the suit]
Professor Hulk: [Whispering, astonished] We worked it out.
[After the fight, P. Hulk stares at his reflection in the water]

This would’ve been a major moment in Avengers: Infinity War, but it’s also understandable why it was changed. First of all, the reveal of Smart Hulk would’ve been a major development that got little to no attention, as right after it occurred, Thanos would wipe out half the Marvel Cinematic Universe and dust a bunch of beloved heroes, which definitely would’ve been viewers’ main focus. Avengers: Endgame would’ve therefore had to serve as the true introduction to Smart Hulk – so might as well make it the official introduction.

Upcoming Marvel Studios projects include Black Widow on May 1st,, The Falcon and The Winter Soldier (rumored for August), The Eternals on November 6th, WandaVision sometime in Fall, Loki in Spring 2021, Doctor Strange in the Multiverse of Madness on May 7, 2021, Spider-Man 3 on July 16, 2021, What If…? in Summer 2021, Hawkeye in Fall 2021, Thor: Love and Thunder on November 5, 2021, and Black Panther 2 on May 6, 2022. Marvel Studios Disney+ series without release dates include Ms. Marvel, Moon Knight, and She-Hulk.

Newest Netflix Christmas Movies Making a Splash With Subscibers
Dungeon Builder: The Demon King’s Labyrinth Is A Modern City! #5 – The Cost of War and Greed
Battlefield 2042 Leaker Explains What Happened to Big Missing Feature
Ant-Man and the Wasp Star Hannah John-Kamen Reflects on Her Amazing Time Filming the Movie
Battlefield 2042 Reveals Over 150 Gameplay Changes Being Made Tomorrow