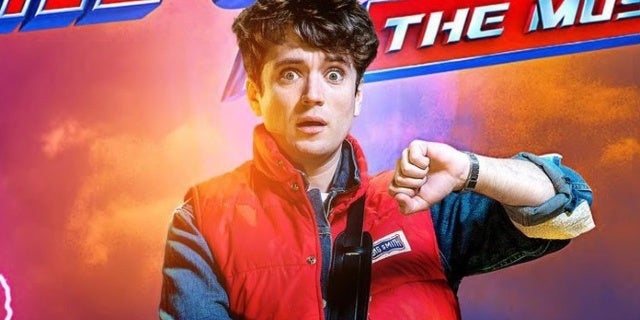 Back to the Future is still making news with homages and fan projects, but the Musical is fast approaching. London Theater Reviews gave fans a first look at the production and the aesthetics are on point. Doc and Marty filming their attempt is in there with a very forbidding JCPenny sign in the background. As is the teen waiting for his friend outside of the Twin Pines Mall. There is also a moment with Jennifer and Marty talking. All of the costuming looks on point and this production might end up becoming a must-see for longtime fans of the series.

The big comeback has already begun in the Manchester Opera House and will run until May 17th. The musical will run throughout London and then go over to East End. It’s been a long road here as this project was announced all the way back in 2012. Tony-winning talent John Rando will be directing. Alan Silvestri, the original composer, will be along to help Geln Ballard with the score as well. A bunch of your favorite hits from the film will be present for the Musical like The Power of Love and Johnny B. Goode. Robert Zemeckis is on as a producer as well, and it happy about seeing this thing finally get made.

“Bob Zemeckis and I have been trying to get this project off the ground for years, but good things take time and finally, the time is right,” Bob Gale said. “Our cast is outstanding, the songs are fantastic, and director John Rando is doing an amazing job ensuring the show truly captures the magic of the movie. We’re thrilled that we can retell our story on stage in a brand-new way, and we’re certain that Back to the Future fans all over the world will share our enthusiasm. In the words of Marty McFly, ‘your kids are gonna love it’—and so will you and your parents.”

A first look to Back to the Future: the show began previews at Manchester Opera House on 20 February for a strictly limited 12-week season, finishing on 17 May.

BACK TO THE FUTURE The Musical is directed by Tony Award-winning director John Rando (Urinetown, On The Town) and stars Roger Bart (Desperate Housewives, Stepford Wives, The Producers) as ‘Doctor Emmett Brown’, Olly Dobson as ‘Marty McFly’, Hugh Coles as ‘George McFly’, Rosanna Hyland as ‘Lorraine Baines’ and Cedric Neal as ‘Goldie Wilson’.

Based on the Universal Pictures/Amblin Entertainment film, BACK TO THE FUTURE The Musical will have a book by Bob Gale, featuring 16 new songs with music and lyrics by Emmy and Grammy Award-winning Alan Silvestri and six-time Grammy Award-winning Glen Ballard, with additional songs from the film including The Power of Love and Johnny B. Goode.