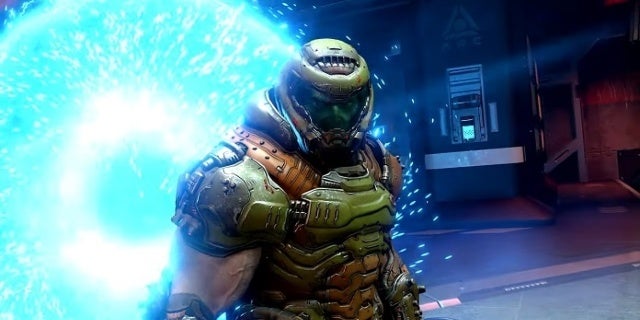 DOOM Eternal is less than a month away now which means DOOM players will be able to try out the game’s new multiplayer mode, Battlemode, in a few weeks. Before they get that chance, Bethesda gave the DOOM community yet another look at the Battlemode and how it works through a Bethesda Game Days preview complete with commentary from the developers. The gameplay demo presented as part of the weekend presentation showed one player controlling a DOOM Slayer while facing off against two different types of demons in several frantic multiplayer matches that consisted of around 50 minutes of gameplay and insights.

Bethesda’s DOOM Eternal demo can be seen below where the players first pick their characters and load into one of the tight, close-quarters arenas there the three players fight. The Slayer has his own unique arsenal while the demons must work together to use environmental hazards and their own powers to try and defeat him.

Watch LIVE from Boston! #BethesdaGameDays from Bethesda on www.twitch.tv

Right from the beginning, you can see some of the mechanics of Battlemode come into play. The Slayer starts laying into the demons with his weapons and manages to kill one, but since he’s unable to defeat the other before the timer runs out, the first demon respawns. The Slayer tries to get loot back from the AI enemies that litter the arena but has his loot blocked by the demon which means he’s forced to fight his way out of the situation to loot later or confront the demons with what resources he has left.

Later in the demo, the perspective switches sides to show someone playing as one one of the demons. The demons have limited resources compared to the Slayer’s arsenal of weapons and his ability to traverse the map quickly, but they’ve got some innovate ways to confront him by calling up AI enemies to help or using other tactics.

Several new trailers and previews like this one have been released recently, so expect to see more like it before DOOM Eternal launches next month. The game releases on March 20th in more than one version, one of which is a DOOM Eternal Collector’s Edition that’s proved difficult to find from some retailers. Unique figures from the game are also being made and are available to order now if the contents of the Collector’s Edition end up not being enough for DOOM fans.