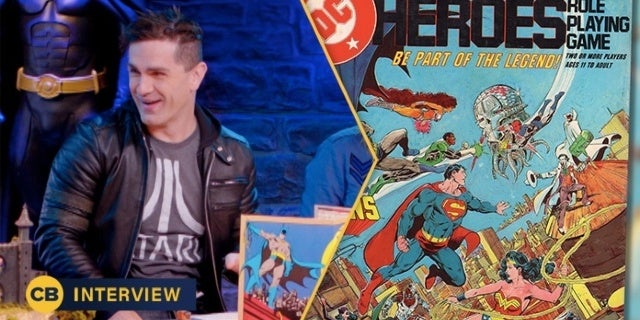 DC Universe has finally debuted its anticipated new tabletop show DC Universe All Star Games, which is now available to stream. The new show gathers a talented cast of players to take on the classic 80s roleplaying game DC Heroes and bring it to life, including Sam Witwer, who acts as the game master in a campaign that includes Freddie Prinze Jr, Clare Grant, Vanessa Marshall, and WWE‘s Xavier Woods. The Jon Lee Brody directed show is full of surprises and is great for fans of the genre and newcomers alike, and ComicBook.com had the chance to speak to Witwer all about how the new show, including why he’s always gravitated towards being a game master, and what fans can looking forward to with this awesome group of players.

“I’ve kind of in 30 years of doing this, I’ve kind of always been the GM for some reason,” Witwer said. “That either means I like to entertain people, or it means that I’m a horrible control freak, or some combination of all the above. I’ve been a player a handful of times, but I love the practice of creating and structuring a story, and then I really love watching the players ruin my story, as they don’t do what I expect them to do. I love being surprised by the players. That’s part of what makes the hobby so incredible. I like the whole, it’s a cooperative storytelling experience, and as a GM I get to be the writer, director, and the supporting cast, and then I get to watch as I have no control over my protagonists. I just love that.”

DC Universe All Star Games is a perfect introduction to roleplaying games and tabletop, though taking on your first campaign as the game master can be daunting for sure, and Witwer shared some effective advice for those looking to try it out.

“Just do it, just do it,” Witwer said. “And then the other, look, if you have a great group of friends who are all at the table to not only have fun, but to see to it that everyone else is having fun, you can’t lose. You just really can’t. I mean, conversely, what sucks is if you have one bad apple, it does sort of hinder the fun, but generally, if you have good friends and they all want to see this succeed, you’ll succeed. Just jump in and do it.”

“The other thing is don’t be afraid to have things go off the rails,” Witwer said. “That’s why it’s a game, and that’s why you’re not writing a novel here. You’re doing a cooperative storytelling experience, so just roll with it. If ever you get too stressed out or you need to think about something for a second, call a bathroom break. That’s how you do it. You just say, ‘Hey, let’s take a little bathroom break, whatever, get drinks, and eat some Doritos’. Then you go away and think for about five minutes and figure out what you’re going to do next. But just have fun. The game is there to have fun and just go with it.”

Witwer still loves playing games as much as he did when he first discovered roleplaying games, though even with all that experience he still fights anxiety when running a game every now and then, though it is always worth it in the end.

“In terms of my happiest memories, they still occur,” Witwer said. “I have a great group of people that I game with, and then there’s Freddie and my friends who I game with on camera, and it’s always a rewarding experience. And I will tell you, kind of harkening back to your last question, there are plenty of times where I have major anxiety over game mastering, especially when you’re on camera.”

“Freddie and I did a Star Wars game for a long time with the cast of Star Wars Rebels, and I remember there was this one day I was driving and I was, I don’t know, I was having maybe particularly a bad day, and I was driving over to game with Freddie and them and I was like, ‘It’s going to suck. I don’t have any good ideas for them. They’re all sort of, my ideas are dumb. This day is dumb. I’m dumb. This is not, why am I even doing this? And we’re doing it on camera.’ The camera thing was really also bumming me out, because I’m like, ‘I’m going to embarrass myself. So much embarrassment involved.’ Fast forward several hours and I’m driving home going, ‘That was like the best time ever. That was incredible. I forget that this is such an incredible thing. That this is like the best hobby in the world. It’s better than video games. It’s incredible.’ And I forget also how wildly entertaining my friends are, Freddie and Vanessa. They are so hilarious, and fun, and good-natured. So yeah, it’s that kind of thing. Driving there all doom and gloom. ‘This sucks. Why am I doing this? Why am I doing this on camera?’ Driving home going ‘That was incredible. That was unbelievably fun.'”

“That one instance has become this touchstone,” Witwer said. “Every time I get to go into a gaming situation where I feel apprehensive, I tell myself that story. I’m like, ‘Remember that time’, and it gets me there. Like, ‘Oh no, no, no, that’s right, this is part of the process, feeling the anxiety of having to generate this story, but you’ll get over that. You’ll be fine. It’s going to go really, really well.’ And yeah. It’s this DC Universe All Stars, I’ve got to tell you this story was one of the most ambitious things I’ve ever tried to do in an RPG. I worked really, really hard on the story, and the characters, and what may or may not happen, and how this is all going to go. It was really, again, hugely ambitious. So I definitely drove and I had to psych myself up with the whole story. ‘Remember, it’s a good time.'”

He had that same rewarding feeling after the first episode of DC Universe All-Star Games, and he even worked one of his dogs into the story, who was also in good health after a successful surgery, so a win all the way around.

“It was made worse by the fact that I had these two dogs, and one of them was having a big surgery that day, and went home from The Breakfast League just glowing,” Witwer said. “It couldn’t have gone better as far as I was concerned. The players were amazing. The one guy I didn’t know, Xavier, he’s my people. He’s amazing. Clare is, as always, is scheming and amazing, and Vanessa is just wonderful, and wonderfully engaged, and warm, and Freddie is just a maniac. Then I got to drive to the animal hospital and visit my little pit bull, and the surgery went really well, so it was just kind of an amazing day. It was like, ‘Ah, this is really, really cool’, and the story, the thing with my pit bull, actually, plays into the DC Universe All Stars story.”

It does make a GM’s life easier when they have a table full of enthusastic players, and DC Universe All Star Games has that in spades.

“They all shake things up AND because I know these people, I put them in positions where they can shake things up,” Witwer said. “Clare is, she’s a get things done type of player. I’ve played with her before, and so to give her a character that had to make some rather … she had a moral decision she had to make and it was kind of behind the scenes. I’ll be interesting to see how they cut it, but I put her in a position where she either had to do some very bad things or very good things with consequences, so we’ll see how she handled that. Vanessa, I just love it because she’s a newish player. She started playing very recently, and the fact that she has become, she just kind of disappears into the role, and I really loved the sort of the strength that she brought to her popular girl Molly Ringwald Breakfast Club character. I’d love to say more, but it spoils a lot that’s going to happen. Freddie is just a maniac, and he had a very satisfying personal arc.”

Now, there was one player who Witwer never had the chance to play with previously in WWE’s Xavier Woods, but Woods did not disappoint in the least.

“Then Xavier, he’s the guy I’ve got to say like, probably because I didn’t know him, the stuff that he ends up doing was so in character and then also personally uncomfortable for me,” Witwer said. “I loved it. No, he really does. Watch it. You’re going to watch him do things and then watch me go, ‘No, don’t do that.’ ‘I did it.’ ‘You did it. Why is he doing it? He’s not stopping. He’s going, it’s even worse now. Oh god’, which was so fun and so uncomfortable. I don’t know if it’s in the cut, but I literally would like rub my brow and start sweating he made me so uncomfortable, which then made for a great story. I’m like, ‘I don’t like what he’s doing. That’s great. That’s incredible.’ It’s really the way he decided to go about his thing that made perfect sense to him, and frankly, I mean again, I think about it and I laughed my ass off. And again, I feel like part of being a good Game Master is allowing your players to do that even if you’re already uncomfortable with it.”

“So he was, I’ve got to say, probably because I don’t know him and he’s a new friend of mine, he was kind of the wild card,” Witwer said. “I think a lot about what he was doing, and if and when we get a chance to do this again, it’s going to be really fun to deal with the consequences of what he was doing. That’s going to be fun. That’s my revenge for him making me feel uncomfortable. Should we ever do this again, I shall avenge myself by having there be consequences.”

Looks like Woods better get prepared, because things are going to get even crazier if season 2 comes to pass.

You can check out the first episode of DC Universe’s All-Star Games right here, and you can check out more of our tabletop coverage right here! You can also hit me up on Twitter @MattAguilarCB for all things tabletop!