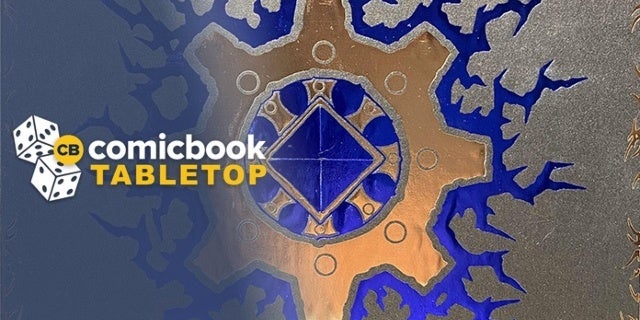 Beadle & Grimm’s launched in 2018 as the brainchild of a group of veteran D&D players including actor Matthew Lillard. Their vision was to provide a product for the busy DM, a boxed set that would allow the DM to quickly prepare a session for their players. While some saw their prices as high (Beadle & Grimm’s Platinum Editions cost $500), the resources the boxes provided and the overall quality made Beadle & Grimm’s products a fun option for the party willing to commit to a full adventure. These boxes weren’t “necessary” for the D&D experience, but they were particularly solid for the party that had some extra cash and not a lot of extra time.

Last fall, Beadle & Grimm’s announced they were working on a boxed set based on Eberron: Rising From the Last War, a campaign setting book updating the world of Eberron for Fifth Edition play. The new box would be a “Gold Edition,” a box a little less costly than the mammoth Platinum Editions released for official adventures, but a bit more bulky than the Silver Edition released for Ghosts of Saltmarsh last summer. What was interesting was that less than half of Eberron: Rising From the Last War had adventures for Beadle & Grimm’s to adapt, which meant that Beadle & Grimm’s had to take a different approach to designing this new box.

Personally, I’ve always believed that Beadle & Grimm’s biggest strength was the tools they provided to DMs, and the Gold Edition of Eberron: Rising From the Last War contains plenty of material designed to help DMs bring the world of Eberron to life. In addition to the must-have encounter cards made to rest on a DM screen, the Gold Edition also contains a set of 28 magic item cards that can be handed to players when they discover one of the many strange artifacts unique to Eberron. Beadle & Grimm’s also provided a number of new battle maps for Eberron-specific locations, such as Lightning Trains or a Fallen Warforged Colossus. These maps are extraordinarily detailed and really capture the flavor of Eberron. Although many of the maps were made to be used for one of four new Bonus Encounters also provided in the box, they’re generic enough that they can be easily adapted by any DM. In fact, I already have plans to use one of the maps in my home campaign in the not too distant future.

The Gold Edition also comes with a number of handouts, including broadsheets that tease the Bonus Encounters provided in the box, patron letters for the new Party Patron mechanic introduced in Eberron: Rising From the Last War, and a pamphlet on the planes of Eberron to help educate the players. There’s also a new piece of jewelry in the form of a Feather Token (which my wife commented was Beadle & Grimm’s best “artifact” yet) and some Dragonshards that players can turn into a necklace. My favorite handout were the Dragonmark temporary tattoos, which are very silly, but also a great way to get players into character. The box also contains two posters – an annotated map of Khorvaire and a new cutout map of Sharn which is absolutely fantastic and wall-worthy.

I’ve had the opportunity to watch Beadle & Grimm’s hone their craft over the last two years, and they have very quickly hit their stride. Their boxes have quickly found a balance between utility, handiness, and fun excess. Not only do they enhance the D&D gaming experience, Beadle & Grimm’s really know what players want and what DMs need, which makes the Gold Edition (and other boxes) a fantastic purchase.

Beadle & Grimm’s Eberron: Rising From the Last War Gold Editionis available on their website for $249.99.