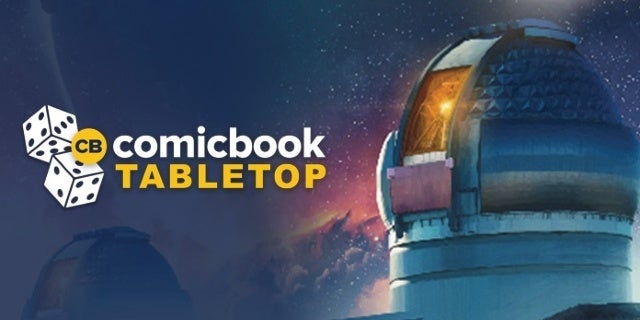 Renegade Game Studios is taking things to the cosmos with their newest game, a game titled The Search for Planet X. The new game from Foxtrot Games was designed by Ben Rosset and Matthew O’Malley, and features art from Michael Pedro and James Masino, and as you can see in the image below, if the art is half as impressive as the box art fans are in for a treat. In The Search for Planet X players will become Astronomers and use observations and logical deductions to search a hypothetical planet, which will change with each game thanks to the companion app that randomly selects an arrangement of objects and a new location for the planet in question.

The earth will travel around the sun each round, and during that round players will use the app to perform scans and attend conferences to gain information about the location of the objects they need to find, and with each new piece they’ll mark it down on their deduction sheets. As you learn about more locations, you can start to publish theories, which then get you points.

As more and more objects are located, you’ll begin to narrow down the possible locations of Planet X, and if you’ve got a guess, you will use the app to conduct a search. The first player to locate the planet successfully ends the game, and then you will figure out who wins the game by counting all the points you’ve earned along the way.

You can find the official description of The Search for Planet X below.

“The Search for Planet X captures the thrill of discovery, the puzzly-nature of astronomical investigation, and the competition inherent in the scientific process. Can you be the one to find Planet X?

At the edge of our solar system, a dark planet may lurk. In 2015, astronomers estimated a large distant planet could explain the unique orbits of dwarf planets and other objects. Since then, astronomers have been scanning the sky, hoping to find this planet.”

The Search for Planet X hits stores this June.

What do you think of Renegade’s new game? Let us know in the comments or hit me up on Twitter @MattAguilarCB for all things tabletop!