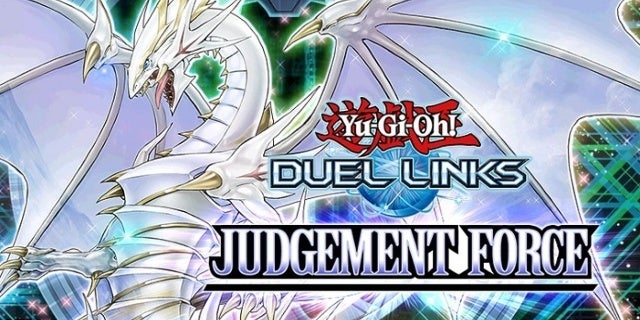 Konami added a new box of Yu-Gi-Oh! cards to Yu-Gi-Oh! Duel Links this week with the release of the Judgement Force box. It’s live in the mobile dueling game now and includes a bunch of valuable cards players have been eager to add to their collection ever since Konami first announced it. Like the other boxes that have been added to the game, it boasts a variety of cards at different rarities spread out throughout varying card types like Synchro Monsters and Fusion cards. The biggest addition to Duel Links through the deck is the arrival of the Blue-Eyes Spirit Dragon Synchro card.

Head to the game’s store now and you’ll find that you can’t really miss the Judgement Force box. Before you ever get into the store, there’s a notification in the front of the building that tells players the box is there for them to look through. You can buy either one pack for 50 Gems or six packs for 300 Gems and can also pay for them with real money like usual, if you’d prefer.

The possible Ultra Rare cards players can get from the box include the Blue-Eyes Spirit Dragon, Michael, the Arch-Lightsworn, Evigishki Soul Ogre, Maiden with Eyes of Blue, Judgment Dragon, Gladiator Beast Vespasius, Gragunity Couse, Glow-Up Bulb, and Kaiser Vorse Raider. There are several cards in there that are built around the Blue-Eyes meta, so expect to see some more of those decks in the PvP side of the game if you’re planning on going online to play against others.

Konami has the full list of cards available from the box on the game’s site for those who want a quick look at everything that’s available. Just as the game helps players build out their decks to have the best cards, the site offers recommendations for what types of cards players should hope to get from the deck.

The top combo recommended for the deck by the site is to get the Sage with Eyes of Blue card (different from the Maiden with Eyes of Blue) and use its effect to send another Effect Monster of yours to the graveyard and summon a Blue-Eyes White Dragon. Doing so will get you one step closer to summoning the Synchro card Blue-Eyes Spirit Dragon to limit how many Special Summons happen while the card’s on the field.