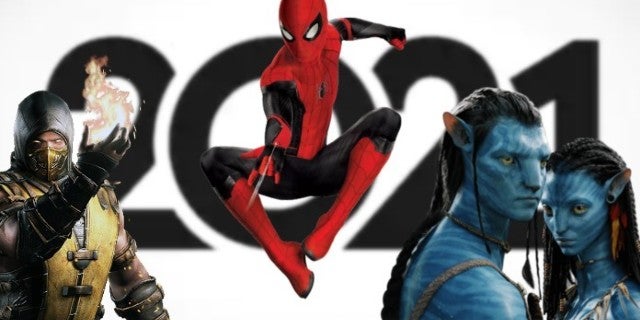 2020 was going to be a fun year for movies, but a lot of fans were really looking forward to the 2021 year in movies. 2021 was slated to bring everything to dual Keanu Reeves action epics (Matrix 4, John Wick 4), to some of Marvel’s most anticipated Phase 4 releases (Doctor Strange: In the Multiverse of Madness, Shang-Chi and the Legend of the Ten Rings, Thor: Love & Thunder), not to mention the long-awaited return of The Batman and The Suicide Squad in theaters. If that wasn’t enough, we had the original Jurassic Park stars also coming back for a new age in Jurassic World: Dominion, plus James Cameron finally returning with Avatar 2.

However, thanks to the Coroanvirus Pandemic, the entire slate of 2021 movies has now been thrown out of whack. That’s because a lot of 2020 headliners are now coming in 2021, and a lot of films currently shooting for release next year may not make the deadline.

The reboot of the Mortal Kombat movie franchise is still slated to be released on January 15th.  Simon McQuoid is taking on his directorial debut with the film, which has nice mix of American and Asian stars filling out the iconic video game characters. Hopefully the action and edge are sharper than the 1995 film.

The Peter Rabbit sequel was set to hit in April 2020, then August, but has now been rescheduled for January 15th in the US.

Shang-Chi and the Legend of the Ten Rings – Feb. 12th

Marvel’s first big martial arts superhero action flick is hopefully still going to arrive on its intended release date. It has the makings to be a major game-changer for the franchise, in a lot of ways.

The Ghostbusters reboot was supposed to hit on July 10, 2020, but has been pushed to next year to give the franchise a true chance at a fresh start. The first trailer got a lot of fans excited, so Sony can take its time marketing it over the next year.

Fast and Furious 9 just did it’s whole big trailer release party event in Miami over Super Bowl weekend, and then the Coronavirus Pandemic swept through and shut down what should’ve been Fast 9‘s big May 2020 race against Marvel.

Doctor Strange in the Multiverse of Madness – May 7th

Doctor Strange 2 was supposed to be opening the summer season in 2021 – a nice upgrade for the franchise. It remains to be seen (but is nonetheless expected) if Marvel Studios keeps with this timeline.

May 21st was slated to be “Keanu Day,” as action star Keanu Reeves was dropping two massive franchise fourth chapters: John Wick: Chapter 4 and The Matrix 4. Needless to say, fans were prepared for THE double feature of action double features, and hopefully they still get their wish.

Emma Stone looked like she was ready to crush this origin story of the 101 Dalmatians villain, with Emma Thompson, Mark Strong and other talents along for the twisted ride. It’s one of the Disney live-action films we’re probably most excited for.

The third film in the Jurassic World franchise is bringing back original Jurassic Park stars Sam Neill, Laura Dern and Jeff Goldblum. Meanwhile, the dinosaurs  are now roaming free in the wild of America (and beyond) and human cloning is a thing, after the twist ending of the last film. With Jurassic World 3 having been in production as the Coronavirus Pandemic hit, here’s hoping things get completed in time.

The Batman reboot was finally out of limbo and in production – but now COVID-19 has brought that shoot to a halt. Will The Batman make it in time for the summer slot, or get knocked back to later in 2021? It remains to be seen.

One big sequel for the kids, and one more Harrison Ford adventure for the whole family. Great way to kick off the July 4th weekend.

Marvel’s Spider-Man Threequel is due in July 2021, and it has what star Tom Holland is calling a “crazy” script. Homecoming and Far From Home director Jon Watts is returning.

LeBron James is meanwhile reviving the Space Jam franchise on that same date.

Tom Cruise and director Chris McQuarrie are set to begin the two-film final run of Cruise’s elite agent, Ethan Hunt. The series has really turned on new waves of fans since Ghost Protocol, with McQuarrie being the only repeat director, now on his third installment.

DC Fans are set to get a big win (and redemption) from Guardians of the Galaxy director James Gunn hopping onboard this new take on the Suicide Squad franchise. The cast is crazy stacked:

Tom Hanks, Austin Butler and Maggie Gyllenhaal were set to star in this biopic, but production was halted when Hanks tested positive for COVID-19.

Uncharted was just getting underway, but it’s now been put on standby, thanks to the pandemic. Tom Holland and Mark Wahlberg are a pairing a lot of fans want to see, sooner before later.

Well, it doesn’t much different than that, now does it? You can either go listen to a cast of rapping historical figures from America’s past, or hear the screams of Michael Myers’ next round of victims. Up to you.

Thor: Ragnarok director Taika Waititi is coming back with an even more epic chapter, that will see Natalie Portman step back into the Marvel movie franchise. And this time, Portman’s Jane Foster will be swinging a hammer of her own, alongside Tessa Thompson’s Valkyrie. Christian Bale will play the villain.

The next installment of the Harry Potter prequel will at least be getting deeper into the Dumbledore family history and ties, over the the final act reveal of the previous film. Hopefully it’s also a better film, in general, than the last installment.

John Francis Daley and Jonathan Goldstein have turned in a new script for this adaptation of the popular game, which they will also direct.

Can James Cameron pull off another billion (or two billion?) dollar miracle at the box office? Can the film even be completed in time with the Coronavirus Pandemic delays? Heck, what would be another little wait for the most late-arriving sequel ever?

Yep, Christmas time 2021 will have a little something for everyone. If all three of these films manage to get done in time. The Rock’s Black Adam could be a hard race to win, as the actor is currently delayed on the film he was making before Black Adam.

Meanwhile, Robert Downey Jr. is finally back as Sherlock Holmes!

What 2021 movie are you looking forward to the most? Do you think the list will change with more Coronavirus Pandemic delays? Let us know in the comments!