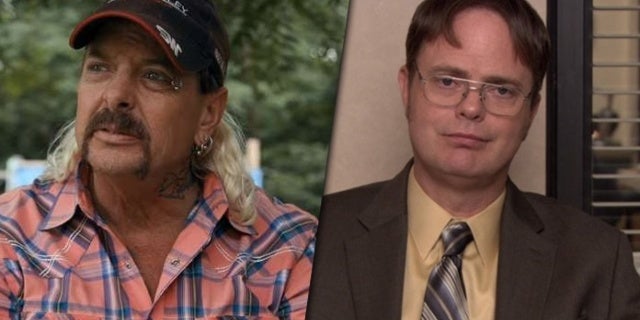 Dwight Schrute wouldn’t make a bad Tiger King, that’s for sure. Riding the meme wave splashing out of Netflix’s Tiger King: Murder, Mayhem, and Madness, Schrute himself — actor Rainn Wilson — uploaded a mashup between his character from The Office and meme king Joe Exotic. Taking to Instagram Monday night, Wilson uploaded an image crossover using Schrute’s likeness on a photo of Exotic that has been widely circulated online. With a caption reading simply “Dwight Exotic,” the art even includes DwightExoticTV.com on Exotic’s ballcap, a play on the latter’s former web series broadcast live from Wynnewood Exotic Animal Park.

Exotic, real name Joseph Maldonado-Passage, is the focus of the massive Netflix sensation. At one point, the eccentric character was the owner-operator of Wynnewood. Last year, the former zookeeper was convicted of 17 various wildlife charges and two for his role in a murder-for-hire plot, the larger focus of the documentary. Maldonado-Passage is currently serving 22 years in the federal prison sentence.

“The conviction of Mr. Schreibvogel Maldonado Passage was made based upon only a handful of vivid examples of his malicious intent to murder me,” Big Cat Rescue’s Carole Baskin said (via NatGeo) at the sentencing hearing. “As you consider his sentence, I would just like you to take into account that if this vicious, obsessed man is ever released from jail, my life and my family’s lives, will return to what it was like during the decade leading up to his arrest.”

Netflix’s synopsis for the series can be found below.

“Among the eccentrics and cult personalities in the stranger-than-fiction world of big cat owners, few stand out more than Joe Exotic, a mulleted, gun-toting polygamist and country western singer who presides over an Oklahoma roadside zoo. Charismatic but misguided, Joe and an unbelievable cast of characters including drug kingpins, conmen, and cult leaders all share a passion for big cats, and the status and attention their dangerous menageries garner. But things take a dark turn when Carole Baskin, an animal activist and owner of a big cat sanctuary, threatens to put them out of business, stoking a rivalry that eventually leads to Joe’s arrest for a murder-for-hire plot, and reveals a twisted tale where the only thing more dangerous than a big cat is its owner.”

Tiger King: Murder, Mayhem, and Madness is now streaming on Netflix as are all nine seasons of The Office.