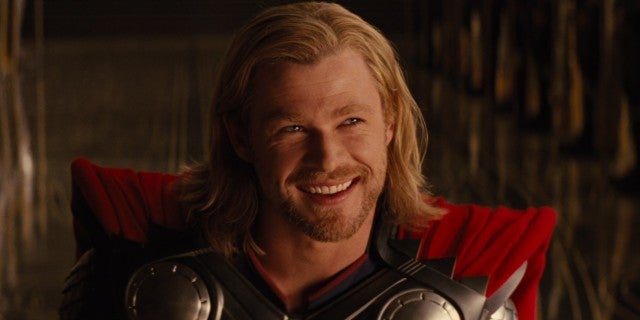 No doubt the hardest part of Chris Hemsworth‘s career these days is getting viewers to separate him from his onscreen persona as Thor, in the Marvel Cinematic Universe. That’s why it’s so ironic to think that back to when Hemsworth first became Thor in the 2010s, and learn that his family actually had more trouble looking at him as Thor at the time! Chris Hemsworth told that little anecdote to GQ, stating that “It was quite jarring for my family and friends when I was on-screen doing a straight, heroic, sort of overly masculine kind of thing.”

Chris Hemsworth shared the reflection on his Thor casting as part of GQ‘s feature on the Marvel star as an icon of the “Post-Hunk Era” in Hollywood. His larger point was that being cast as Thor – a brawny, machismo man – was very much against type for who he really was as a person. So much so, that it shocked the rest of his family to learn that he would be taking on the part.

It’s an interesting piece from Hemsworth, who describes goes on to detail how he has since gotten control of his career, and been able to steer his onscreen persona in a different direction. He became a ditsy secretary for the female Ghostbusters reboot; he worked with Taika Waititi to resurrected the stalling Thor franchise (thanks The Dark World) as a more comedic send-up of Thunder God’s comic book machismo; and even in his new action film Extraction, Hemsworth plays a deeply wounded and emotional version of the old testosterone action hero.

All in all, Chris Hemsworth has been a refreshing new face among Hollywood’s modern leading man. The Australian actor may be sex symbol heartthrob, yes, but there are just as many men and women who swoon over the fact that Hemsworth is a very dedicated husband to Fast & Furious franchise actress Elsa Pataky – and a dedicated father to three children with her. More often than not, if Hemsworth goes viral outside of a Marvel movie it’s for his family antics, which pretty much tells you everything you need to now about him.

If all that new-age leading man appeal wasn’t enough, Hemsworth will next make people swoon by handing his iconic Thor hammer over to his former leading lady Natalie Portman, in Taika Waititi’s Thor: Ragnarok sequel Thor: Love & Thunder. That’s already been a big deal for a lot of Marvel fans, who felt that Portman’s Jane Foster got shorted as a damsel in distress, early in the franchise.