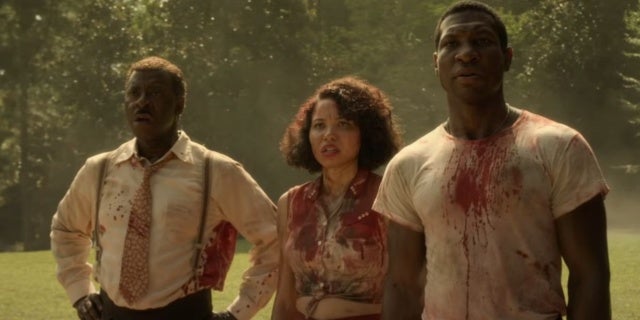 It seems like our first full look at HBO’s Lovecraft Country is on the horizon. Executive producer J.J. Abrams has debuted an ominous teaser video on his Twitter account for the series simply captioned with the number 1 and a brief snippet of footage and audio. Abrams cryptic video, coupled with posts from creator Misha Green and executive producer Jordan Peele, seems to tease we’ll be getting our first full trailer for the series sometime tomorrow. Check out the three cryptic videos below and look for the first Lovecraft Country trailer this Friday. HBO has previously not revealed a premiere date for the series, but that could also be revealed with the trailer drop.

Based on the novel of the same name by Matt Ruff, the series stars Courtney B. Vance, Jamie Chung, Jurnee Smollett-Bell, Michael Kenneth Williams and Jonathan Majors. The drama series follows Atticus Freeman (Majors) as he joins up with his friend Leti (Jurnee Smollett-Bell) and his Uncle George (Courtney B. Vance) to embark on a road trip across 1950s Jim Crow America in search of his missing father, Montrose Freeman (Michael Kenneth Williams). This begins a struggle to survive and overcome both the racist terrors of white America and the terrifying monsters that could be ripped from an H.P. Lovecraft paperback.

The new series was actually put into development before J.J. Abrams’ Bad Robot had signed their exclusive deal with WarnerMedia, but fits in perfectly with the content they’ll be creating for them down the line. It was revealed earlier this month that Abrams is developing a Justice League Dark series for HBO Max along with a spin-off of Stephen King’s The Shining about the Overlook Hotel.

The official description of Matt Ruff’s original novel offers some other teases for what we can perhaps expect, teasing the trio’s “journey to the manor of Mr. Braithwhite—heir to the estate that owned one of Atticus’s ancestors—they encounter both mundane terrors of white America and malevolent spirits that seem straight out of the weird tales George devours. At the manor, Atticus discovers his father in chains, held prisoner by a secret cabal named the Order of the Ancient Dawn — led by Samuel Braithwhite and his son Caleb — which has gathered to orchestrate a ritual that shockingly centers on Atticus. And his one hope of salvation may be the seed of his—and the whole Turner clan’s—destruction.” Tony Goldwyn will star as Samuel Braithwhite with Abbey Lee as his daughter Christina.