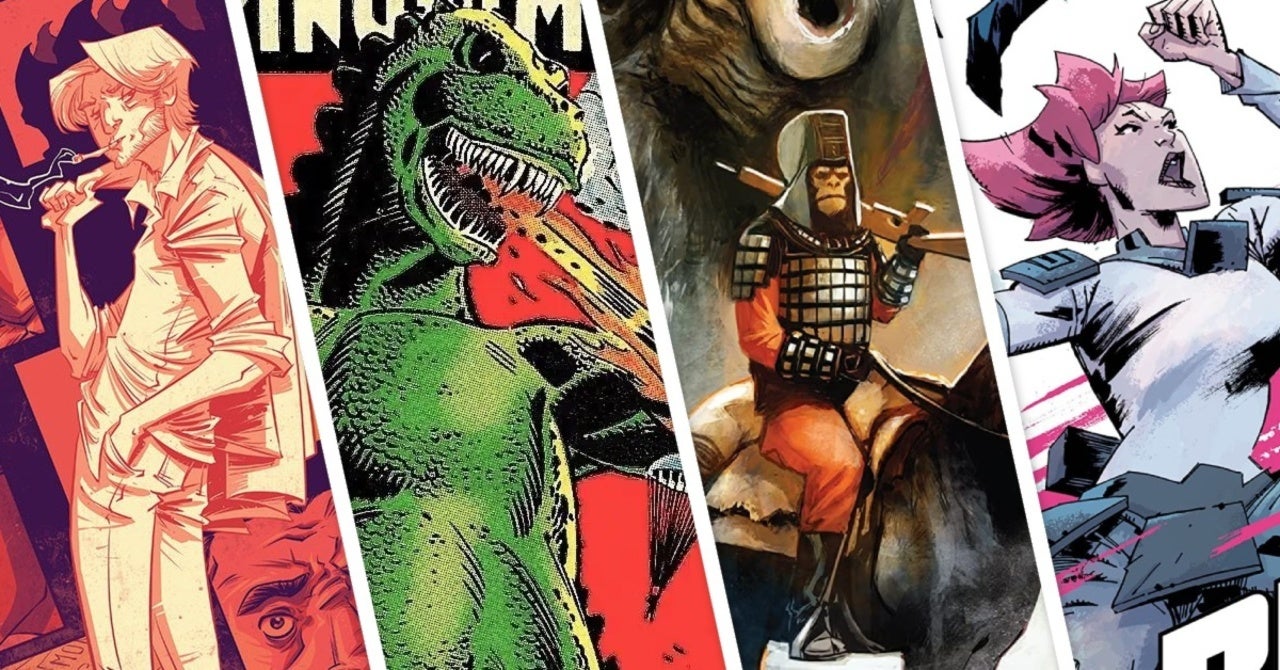 Godzilla vs. Kong made its debut in theaters and on HBO Max last week, bringing a bombastic, action-packed blockbuster to audiences when they definitely needed it. The film, which is the fourth installment in Legendary’s Monsterverse franchise, pits the two massive titans in a larger-than-life battle, and culminates in a way that will surely leave some fans wanting more. Since another Monsterverse installment has yet to be officially confirmed, fans have had to get creative with continuing their love for the two monsters — and luckily, there are plenty of existing comic books that can continue that hype.

Between comics that have actually starred Godzilla or King Kong (of which there have been many) and comics that just capture the energy of a massive kaiju brawl, there are a lot of titles for fans to turn to following Godzilla vs. Kong. Here are ten that we’d recommend to start with.

Godzilla, King of the Monsters

One of Godzilla’s first forays into Western comics — and arguably, one of the most charming — is Marvel’s Godzilla, King of the Monsters, which ran for 24 issues in the 1970s. Written by Doug Moench with art by Herb Trimpe, the series threw Godzilla smack-dab in the middle of the Marvel comics universe, allowing for some genuinely unexpected crossovers with the publisher’s heroes and villains.

If nothing else, the sheer novelty of seeing Godzilla share a page with the Avengers, Spider-Man, and the Fantastic Four will easily delight fans.

One of the newer entries into the Godzilla comics canon is IDW’s series, which began with 2011’s Godzilla: Kingdom of Monsters. The series, which takes a decidedly darker tone to Godzilla’s lore, sees him emerging in modern-day Japan for the first time, an event that kicks off the emergence of many more kaijus throughout the world, as well as a fight against Mechagodzilla.

On paper, Kingdom of Monsters shares some similarities to both Godzilla vs. Kong and 2019’s Godzilla: King of the Monsters — but the actual story veers off into paths that are entirely unique and compelling.

Venturing into the Kong side of comics, we have to acknowledge 2007’s comic adaptation of Kong: King of Skull Island. The comic miniseries is labeled as an official authorized sequel to the original 1933 King Kong, and was even created alongside the estate of original franchise creator Merian C. Cooper. The story follows both the late 1950s exploits of the humans on Skull Island, as well as the early history of Kong and the island itself.

If Godzilla vs. Kong left you wanting to know more about King Kong’s lore, this is a relatively recent — but intriguing — place to start.

Kong on the Planet of the Apes

If you’re looking for something that’s more in line with the fantastical Hollow Earth sequences of Godzilla vs. Kong, it feels like Kong on the Planet of the Apes would be up your alley. Yes, Kong really did cross over with the world of Planet of the Apes, in a miniseries that was published by Boom! in 2017 and 2018.

The crossover is as ridiculous and oddly cool as it sounds, and it showcases the genuine fun of placing Kong in an unexpected context.

Shifting to the larger “giant monster” subgenre, we have to acknowledge the ever-evolving franchise of Ultraman — particularly, his recent Marvel Comics miniseries. The title, called The Rise of Ultraman, follows a scientific conspiracy tied to the massive superhero, all under the backdrop of an unprecedented kaiju attack.

The Rise of Ultraman is a perfect jumping-off point for people who want to know more about its titular protagonist, while also injecting some meaningful parts of his larger lore.

Another newer series that fits perfectly in line with Godzilla vs. Kong is The Kaiju Score, which was published by Aftershock across this year. The series follows a ragtag group of criminals planning the heist of a lifetime — which just so happens to be occurring during a planned kaiju attack.

The concept, which is already being developed into a movie at Sony, is incredibly cinematic and fun on so many levels. It’s also the perfect fit for anyone who had complicated feelings about the human characters in Godzilla vs. Kong, as each protagonist in this series is incredibly intriguing and three-dimensional.

Another genre-bending take on the kaiju lore — and the characters who are stuck within it — is the recent Image series Big Girls. As the title suggests, the series follows a series of 300-foot-tall monster-hunting women, who become a significant ally to humanity after men turn into giant, destructive monsters.

The first arc takes a delightful and feminist perspective to the battle between kaiju, all while injecting a lot of style in the process.

Outside of Godzilla, Marvel published a surprising number of monster-related comics, and 1970’s Where Monsters Dwell might remain among the most beloved. The 38-issue series, which was initially created by Stan Lee and Jack Kirby, brought an anthology approach to new monsters from across Marvel lore.

Beyond the draw of getting to see Lee and Kirby lend their talents to the monster genre, Where Monsters Dwell is just wacky and creative enough to be worth any kaiju fan’s time.

For a monster-centric Marvel series that’s a little more recent, there’s Monsters Unleashed, which spun out of a crossover event of the same name in 2017. The short-lived series followed Kei Kawade/Kid Kaiju, monster-hunter Elsa Bloodstone, and a rotating array of giant monsters conjured by Kei.

While it isn’t perfect, Monsters Unleashed is a fun, all-ages take on the world of Marvel monsters — and those who are young at heart will find something to love in it too.

On the DC Comics side of things, one giant monster story stands out beyond the rest, “The Return of the Starfish Conqueror” and “Our Friends, Our Enemies”, a two-issue arc across 1981’s Justice League of America. The story saw the return of Starro, a giant mind-controlling starfish that was the Justice League’s very first established villain decades prior. This time around, Starro is armed with mini starfish that can mind control anyone it latches onto — and it’s up to the current League to save all of humanity.

While only two issues, they’re two impactful and iconic ones, not only for their stellar representation of what the JLA and the larger DC universe has to offer, but also for how genuinely terrifying Starro’s hold can be. Plus, if you read these issues now, you’ll be better prepared for Starro’s movie debut in The Suicide Squad later this year.

Godzilla vs. Kong is now available to stream exclusively on HBO Max.