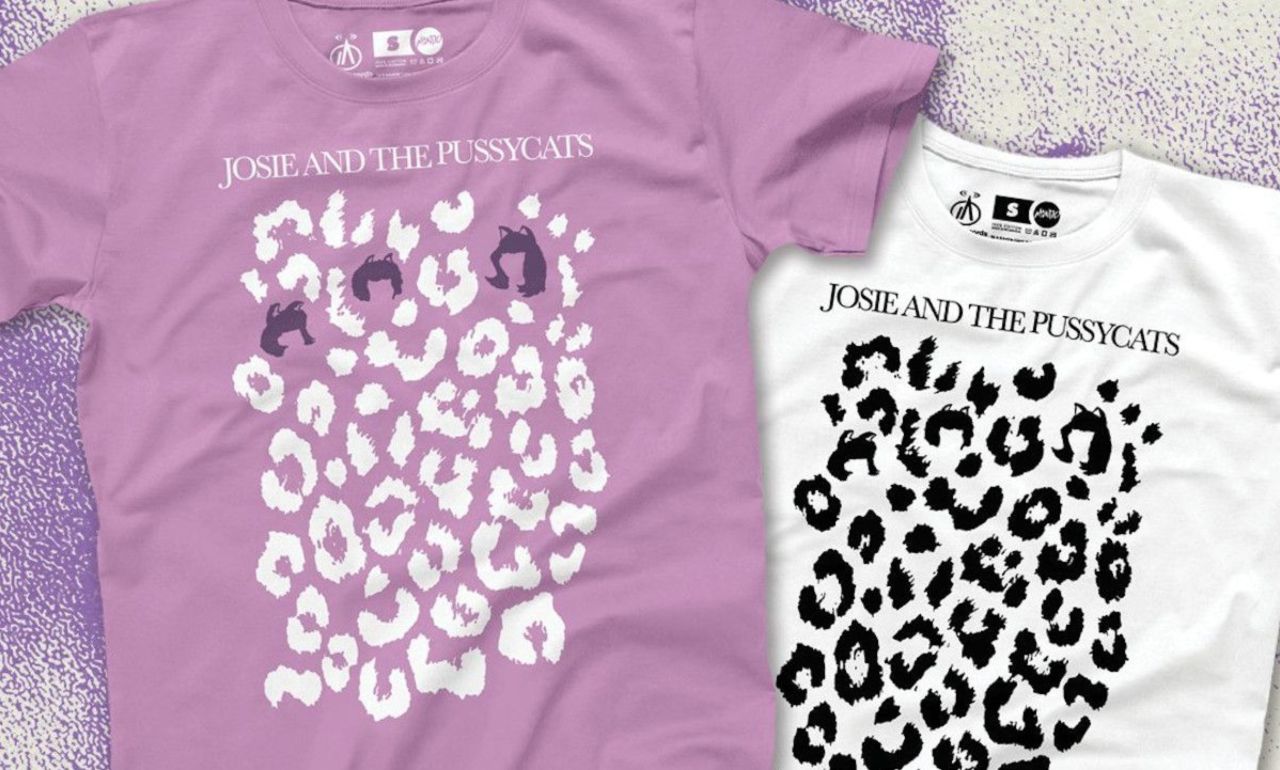 This Friday will mark the 20th anniversary of the theatrical release of Josie and the Pussycats, the feature-length Archie Comics adaptation from directors Harry Elfont and Deborah Kaplan. The film, which was a critical and box office disappointment for Universal Pictures at the time, has found a second life in the home entertainment market and has been reassessed as a clever, underrated cult classic. And now, to celebrate the 20th anniversary coming up in just a couple of days, Mondo has released a line of Josie and the Pussycats-inspired merch for sale on their website, including several t-shirts, a new edition of the soundtrack, and more.

Mondo first released the Josie and the Pussycats soundtrack on vinyl record in 2017, launching it at a party in Los Angeles which saw Kay Hanley of Letters to Cleo — the singing voice of Josie on the soundtrack — playing the songs in public for the first time, flanked by some of the other folks involved with the music, including Adam Schlesinger from Fountains of Wayne. The concert took place on the same night as a special screening of the movie, with the filmmakers on the scene as well as members of the cast.

You can see the Josie and the Pussycats 20th anniversary landing page for Mondo here.

While the character of Josie McCoy had debuted in the comics in 1962, it wasn’t until 1969 that she became a pop star, backed by the Pussycats, Melody Valentine and Valerie Brown. Given the timing, it seems plausible that the Josie and the Pussycats reinvention of Josie’s comic was inspired by the desire to create an animated series, since it was during the 1968-69 TV series that The Archie Show debuted on CBS. That one hailed from Filmation Studios, and after it became a hit (and spun off a hit singe in the form of “Sugar, Sugar”), Hanna-Barbera wanted in on the Archie brand.

So when, in 1969, Josie and the Pussycats debuted, making the character of Josie into a pop star, it was a pretty quick turnaround to get the TV series on the air in 1970. As a result, the cartoon is not especially tied to the comics that serve as its source material, and had to develop its own format — an adventure series akin to Scooby-Doo Where Are You?.

The 2001 film wasn’t especially closely tied to either the comics or the animated series, and centered on the band trying to make it big while trying to stop their record label from brainwashing their audience and taking over the world.

In addition to t-shirts — probably the first officially-released tees since 2001, when the movie failed at the box office — Mondo has a new printing of the soundtrack — this time with purple vinyl, but not the purple leopard print vinyl of the 2017 pressing, which has been unavailable (and climbing in price on eBay) for about a year. There’s also a purple leopard print slip mat to put on your turntable (which is reversible, with the opposite side being the black-and-white Megarecords logo from the movie).