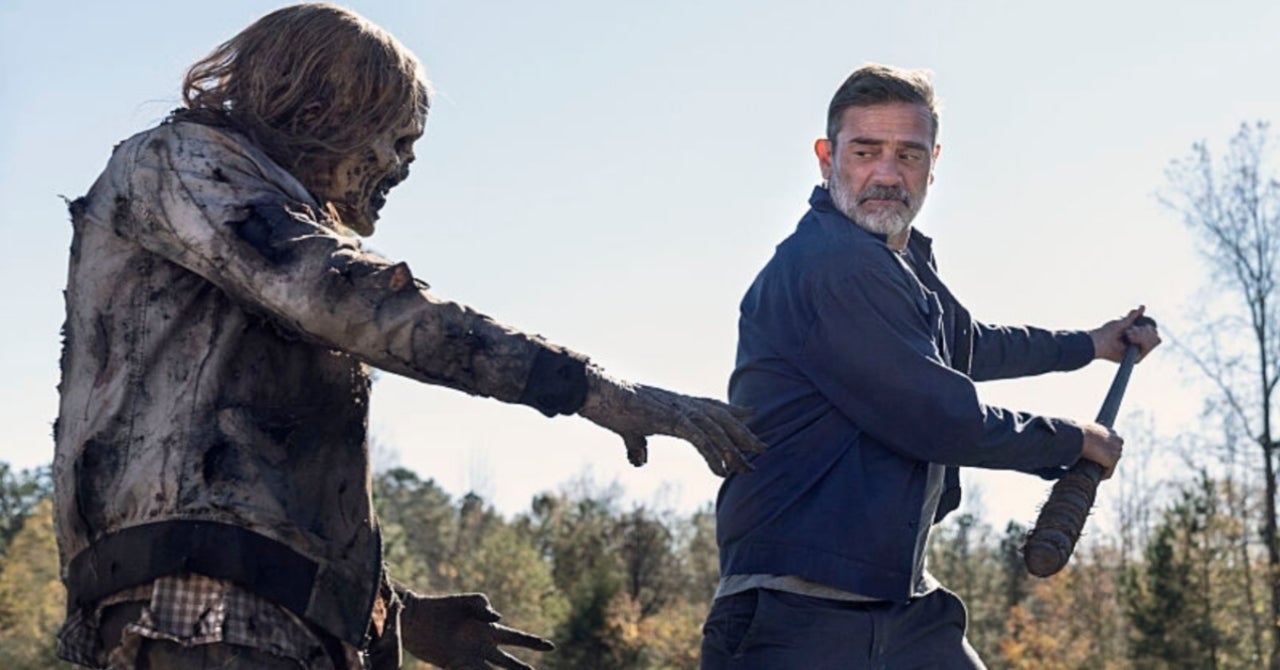 The Walking Dead is keeping things in the family: Negan actor Jeffrey Dean Morgan “can’t wait” for fans to see his 11-year-old son, Gus Morgan, play a walker in the zombie drama’s final season. After Morgan’s wife, actor Hilarie Burton Morgan, portrayed Negan’s wife Lucille in the extended Season 10 episode “Here’s Negan,” the couple’s son is making his own Walking Dead debut as the “featured walker” in Season 11 Episode 5. As filming continues on the 24-episode final season in Senoia, Georgia, Morgan has revealed the first peek at Gus Morgan as one of the undead — and the Walking Dead star is one proud father.

“My kid. Just a peek… as a dad, I have to say, I’d be hard pressed to remember a time I’ve been more proud of this dude,” Morgan wrote on a black-and-white photo of Gus Morgan in Walking Dead special effects makeup. “Can’t wait for y’all to see him in action.”

Morgan revealed his son’s role during a recent appearance on The Late Late Show with James Corden, where the Negan actor said Gus would appear as a featured walker midway through the eight-episode first part of Season 11:

“He’s been getting his Covid test so he can be on set and all that. He is so pumped,” Morgan said. “I just remembered today that last time we did zombie makeup — he’s gonna be a walker and have all the stuff done, and it’s kind of a cool little role he’s doing in the show — the last time we did any zombie makeup on him he looked at his reflection in the mirror and passed out (laughs). That was a few years ago so I’m hoping he doesn’t pass out this time around because the makeup is gonna be extensive and cool. But he’s so excited.”

While promoting his new movie, the Sam Raimi-produced Unholy, Morgan told Conan O’Brien more about his son’s role as one of the few zombified children to appear on The Walking Dead:

“He’s playing a child walker, which if you watch the show, I think we’ve had one or two of them in 10 years. It just doesn’t happen, so there’s something very special about that,” Morgan said on Conan. “His mom has been a walker [in ‘Here’s Negan’], and now he gets to be a walker. It’s turned into a little bit of a family business.”

Morgan explained: “But one of the things about the Covid of it all, this year we’re only using like 20 zombies [extras]. We’ve hired them full-time for the full year and so they’re a different zombie every episode, maybe more than one zombie. And so Gus is also tested, he’s tested along with the rest of the family, so we know that he’s good to go. So it just has worked out really well. So he’s 11 and he gets to be on The Walking Dead in the final season, and that’s super, super exciting. We’re super pumped about it.”

The Final Season of The Walking Dead premieres Sunday, August 22 on AMC. Follow the author @CameronBonomolo on Twitter for all things TWD.