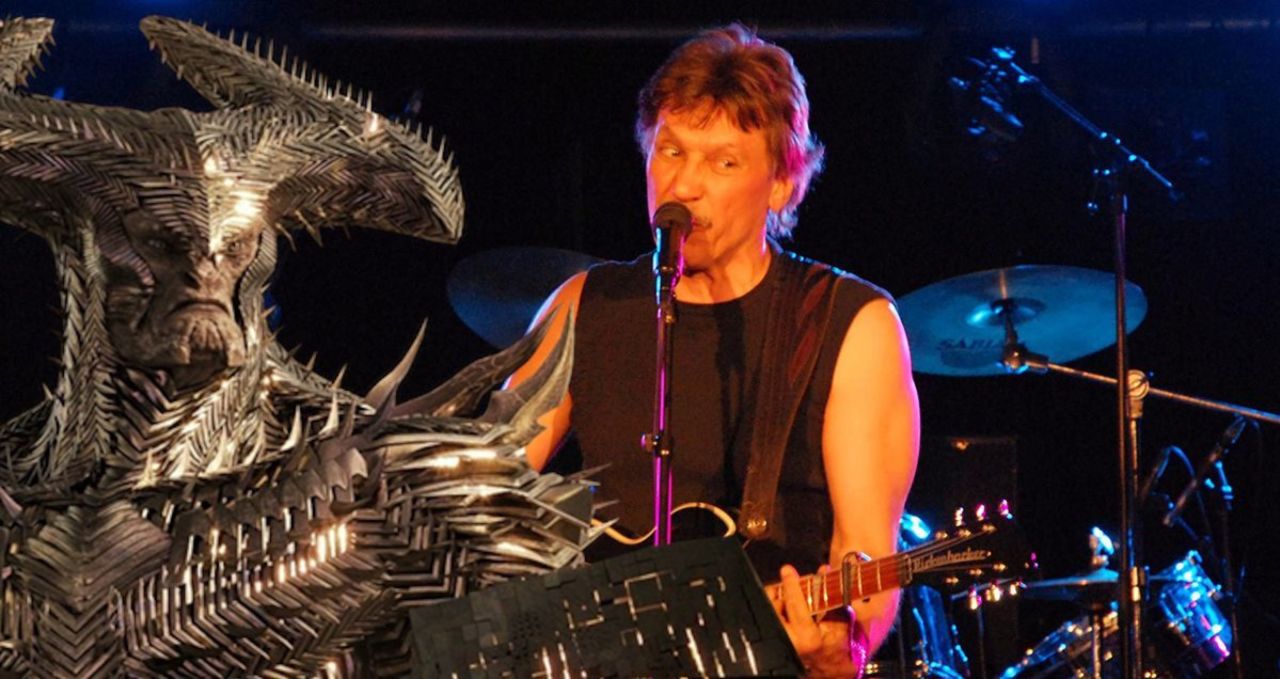 John Kay, the founder of the iconic hard rock group Steppenwolf, had no idea that the much-maligned Justice League movie (and its significantly-improved director’s cut) pitted Superman, Batman, and Wonder Woman against the might of a villain bearing the name of his band. Steppenwolf wasn’t his name, of course; both the band and The New Gods creator Jack Kirby took the name from a 1920s novel by German author Herman Hesse. But he also didn’t know until we spoke last week that Avengers: Endgame, one of the highest-grossing films of all time, had used his song “Hey Lawdy Mama” as the tune that would accompany Stan Lee’s last-ever onscreen Marvel cameo.

The rocker-turned-activist has released a new documentary film, named after one of his band’s most famous songs, “Born to Be Wild.” In the documentary, it tracks Kay’s early life (he was born Joachim Krauledat in East Germany, and his mother snuck the family across the Berlin Wall when he was young) through superstardom with Steppenwolf and his later life, when he and his wife became conservationists…but despite getting into film (you can buy Born to Be Wild: From Rock Star To Wildlife Advocate here), Kay says superhero movies are rarely on his radar.

“I did not know that! — and it’s the villain who’s called that?” Kay told ComicBook with a chuckle. “I have to tell you that I’ve seen Black Panther — I was very interested in that, and I enjoyed it — and I’ve seen one or two Batman films in the past, but I’m really not that big a superhero fan; I think that’s for a younger generation.”

Kay would not have known, unless he watched, that Steppenwolf’s music ended up in Avengers: Endgame. A few years back, Kay divested himself of his music industry assets, selling them off in order to help fund The Maue Kay Foundation, a nonprofit 501(c) (3) charitable foundation formed in 2004 by Kay with his wife, Jutta Maue Kay. Maue Kay supports individuals and organizations engaged in the protection of wildlife, the environment, and human rights. The organization does work of its own, but also gives Kay and his wife an opportunity to travel and visit other organizations, evaluating the work they do and setting up relationships with the ones they consider the best of the best.

“We had often, in years past, social get-togethers with people who were very successful inside their own bubble, and when we said, ‘well, we just came back from Africa,’ what we often ran across was somebody saying, ‘Oh, I’d love to go to Africa, but I can’t leave my company for three weeks,'” Kay explained. “But they did care. They wanted their children, grandchildren, to live on this planet that still has these incredible creatures that are part of the web of life….That’s how we got into this idea of being ambassadors for many of the NGOs that we support, to be able to vouch for their work, and bear witness to what they have been doing, and being a bridge between those who need the funds, and those who have the funds but are not quite sure as to who’s trustworthy.”

For years, John Kay and Steppenwolf (a name he took on after former members of the band also started touring as Steppenwolf, muddying the waters of who was the original) would perform around the country, with a share of the take going into the Maue Kay Foundation to help the nonprofit with its work. When Kay finally retired the band for the last time, that revenue stream dried up, and it motivated him to get to work on what would ultimately evolve into the documentary.

“It was originally rooted in the fact that Steppenwolf was retired as a performing band in October 2019,” Kay explained. “As a consequence, the net proceeds from those engagements, that used to go into the Maue Kay foundation, ceased to be. So I was thinking, how do we keep the funding going so that we can continue to support these entities? It was really rooted in something that I heard years ago by the producer of 60 Minutes. He said, ‘What gets on 60 Minutes? Tell me a story.’ And so I was like, ‘Tell me a story? Well, maybe I could do a fancy version, or a longer version fo a TED Talk type of thing. It was supposed to be a multimedia conversation where you’re in front of a big screen. And I did, with a local fella, put together this hour-long presentation….Then came the pandemic. And so, the various engagements in other part of the country and theaters for this presentation were all cancelled. So it was like, ‘I have this thing sitting here, doing nothing.'”

He said that at first he thought he would just export the PowerPoint presentation, but that when he saw how that looked, he realized he wanted something more dynamic and interactive, so he “went on a hunting expedition” for additional images and narration.

“I had always been, and [my wife] Jutta as well, keen on lending a hand to whoever was working on behalf of our fellow creatures, way before we had this foundation, even,” Kay said. “Our daughter was raised with critters aroudn the house, and it was just something that was on our radar screen. But I also grew up, like so many kids my generation, where Africa, the idea of Africa, was always something that I found intriguing. ‘Someday, I’d like to go there.’ Many years gone by, with Steppenwolf being successful, in 2004, we had more time to devote to other pursuit, and thankfully also the funds to go looking around the world for things that we found intriguing.”

While Kay and Steppenwolf are best known for songs like “Magic Carpet Ride,” “Born to Be Wild,” and “The Pusher,” hardcore fans of the band have long known that he had an interest in music, with songs like “Monster/Suicide/America,” “The Ostrich,” and “Move Over.”

You can get other merchandise and music at the Steppenwolf website, or check out Born to Be Wild: From Rock Star to Wildlife Advocate, at the Maue Kay Foundation link above.

Erreur De Calcul Pour La Belle Comptable ! #1
Glenn Close Wants to Play Cruella Again, Has a “Great Story” for Sequel
Resident Evil Village: The Duke’s Nasty Toes Are Grossing Out Players
WandaVision Fans Aren’t Sure What to Think About Doctor Strange’s Cut Role
The Office: The Father of Jan’s Baby Is Definitely Not Who You Thought It Was