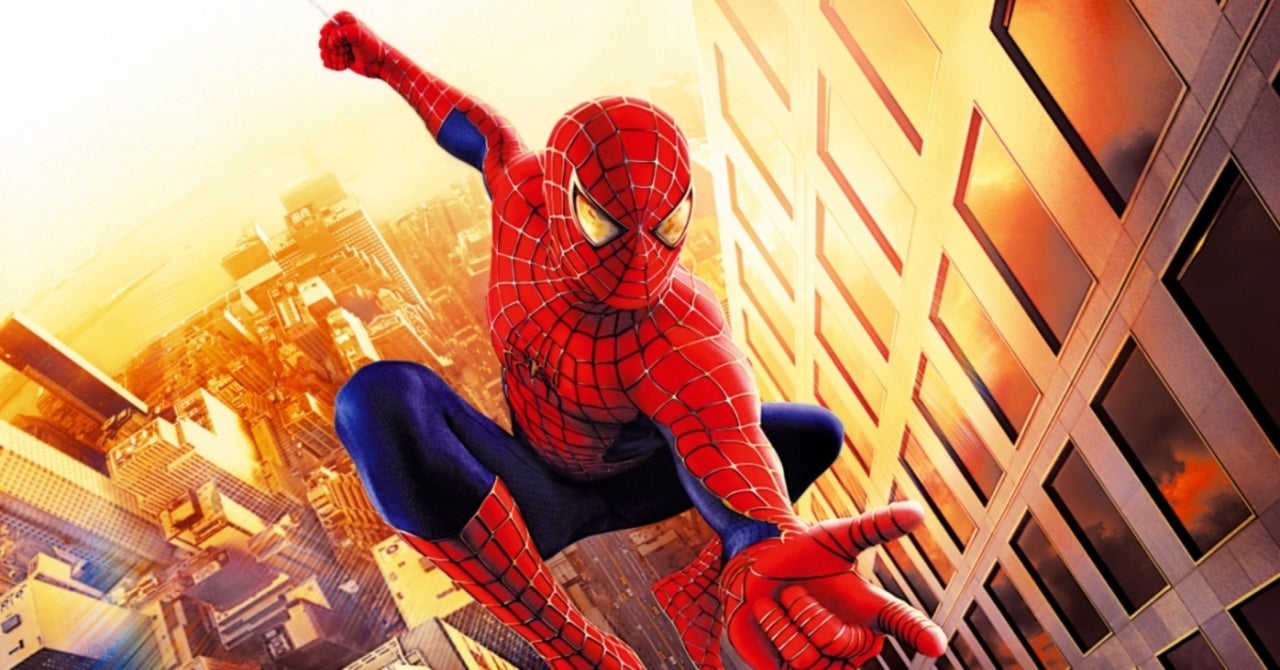 Sam Raimi took Marvel moviegoers for the ultimate spin when Spider-Man swung into theaters 19 years ago on May 3, 2002. After the success of live-action Marvel Comics adaptations Blade and X-Men in the late 1990s and early 2000s, Sony Pictures took the modern comic book blockbuster to the next level when Spider-Man webbed up the third-biggest global box office of 2002 ($821 million) — behind only The Lord of the Rings: The Two Towers ($936m) and Harry Potter and the Chamber of Secrets ($878m) — before spawning a Raimi-directed trilogy with 2004’s Spider-Man 2 and 2007’s Spider-Man 3.

Spider-Man shattered box office records to become the first film in history to earn more than $100 million in its opening weekend, a feat that took heavy-hitters Star Wars: Episode I — The Phantom Menace and Harry Potter and the Sorcerer’s Stone five days to accomplish in 1999 and 2001, respectively. The film ended its theatrical run as the highest-grossing domestic earner of 2002 ($403m) and was the highest-grossing superhero film of all time worldwide until its own record was passed by Spider-Man 3 five years later.

Inspired by the Marvel comics created by Stan Lee and Steve Ditko, Spider-Man sees mild-mannered high-school student Peter Parker (Tobey Maguire) become the web-shooting, wall-crawling Spider-Man when he’s bitten by a genetically-altered spider. Guilt-ridden over the death of his beloved Uncle Ben (Cliff Robertson), Spider-Man vows to use his amazing abilities to fight crime and thwart the Green Goblin (Willem Dafoe) as he comes to understand “with great power comes great responsibility.”

“With Sam Raimi leading the way, I feel like I’m in good hands, and I feel pretty safe about that,” Maguire told MTV in a 2001 interview before starting production on Spider-Man. “I’ve read the comics, and we’re going to honor the comics and at the same time make our own movie.”

Raimi, at the time best known for his much lower-budgeted horror films The Evil Dead and Army of Darkness, was a lifelong fan of the Spider-Man character — who would be making his live-action debut after planned films from Tobe Hooper (The Texas Chainsaw Massacre) and later James Cameron (The Terminator) failed to crawl out of development hell. It was only after Marvel sold the character’s screen rights to Sony for a fee of $7 million that Spider-Man began to take shape with Raimi directing from a script by David Koepp (Jurassic Park).

“I feel like there’s a great bar of expectation that I have to meet,” Raimi said in 2001. “It better be damn good. That’s all I’m thinking, and that’s what occupies all of my waking hours and all of my sleepless nights. ‘Is it good enough? Is it right for the character?’ All I can do is what makes the character work for me and what I was attracted to when I read the comic books and try and bring that to the big screen in the Spider-Man movie and hope that appeals to everyone else.”

Here’s how Spider-Man fans are celebrating the film’s 19th anniversary:

I’m glad the Amazing Spider-Man movies exist in large part because they really make it clear how special Sam Raimi’s Spider-Man movies were. Very similar ground being covered by those movies, but in Raimi’s hands the material really came to life. Still great today, this one. https://t.co/1NefmO3BWn

19 years ago today, Spider-Man (2002) was released in theaters. pic.twitter.com/z0gmY0m6jj

We Are Who We Choose to Be

19 Years ago today Spider-Man (2002) was released in theaters. this film means so much to me because it was the movie that made me who I am today. it made a Spider-Man fan

I want to thank Raimi and the cast for the amazing memories#19Years pic.twitter.com/OBDxwvez1M

19 years ago today, #SpiderMan was released and it cemented the future for comic book movies pic.twitter.com/eOCNEkI5y4

‘Spider-Man’ premiered 19 years ago today on May 3, 2002. Since then, there have been 7 more Spider-Man movies! pic.twitter.com/Toim8cPUi3