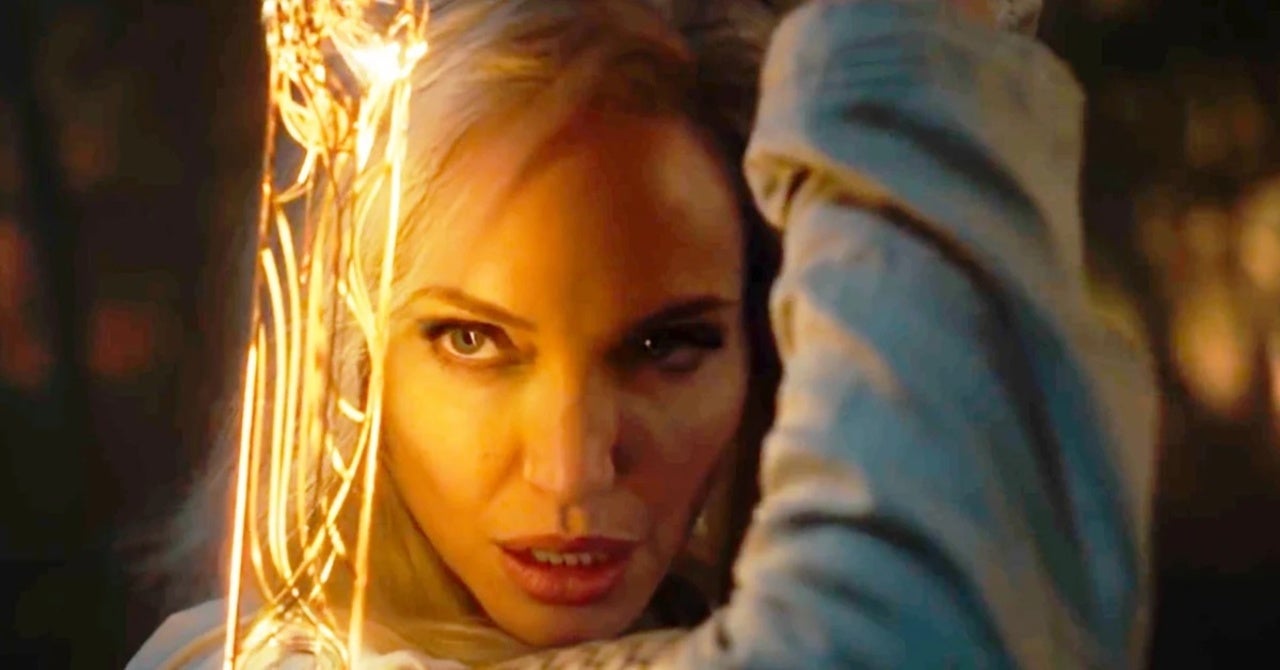 Angelina Jolie has casually let it slip that she’s seen the Eternals trailer – she just wasn’t aware that the rest of us haven’t! Jolie was doing a video interview recently, in which the subject of Marvel’s Eternals movie was brought up. According to Jolie, “I saw the trailer but it’s not out yet – is it?” The interviewer informed her that “All we got is you doing this [makes sword fight pose], and I was like ‘I’m Sold!'” The Eternals’ first-look footage debut with the Marvel Studios Phase 4 sizzle reel trailer that dropped this week, giving fans updated release dates and production reveals on a handful of MCU films.

Eternals has been the most mysterious (and frankly most concerning) movie in Marvel’s Phase 4 lineup. We know the cast of characters the actors are playing, and the general gist of the storyline (competing races of super-beings secretly guiding Earth’s history for centuries), but little else. We have no idea what kind of film Oscar-winning Nomadland director Chloe Zhao has put together for Marvel – or what kind of unique action the Eternals will bring to the screen. Even though the movie is due out in November, no real substantive footage has been shown.

Even the new MCU Phase 4 sizzle reel is conspicuously light on Eternals footage, compared to Black Widow and Shang-Chi – Marvel’s other two 2021 films. The Shang-Chi trailer dropped in mid-April, and that film is due out in September; Marvel fans now speculate that the Eternals will drop an initial teaser between mid-May and mid-June, with a full trailer arriving in July, with the release of Black Widow. That’s all speculation, but it does make sense.

Here’s what we do know from the Eternals synopsis:

Following the events of Avengers: Endgame (2019), an unexpected tragedy forces the Eternals, ancient aliens who have been living on Earth in secret for thousands of years, out of the shadows to reunite against mankind’s most ancient enemy, the Deviants.

There’s long been speculation that Eternals will be using the Marvel Comics lore that revealed Thanos was one of the Eternals – in fact, he’s the cousin of Angelina Jolie‘s character, Thena. If Thanos’ death is the galvanizing event of Eternals’ storyline, it could indicate that Marvel has some big surprises in the film that they’re not ready to share yet.

Eternals will be in theaters on November 5th.