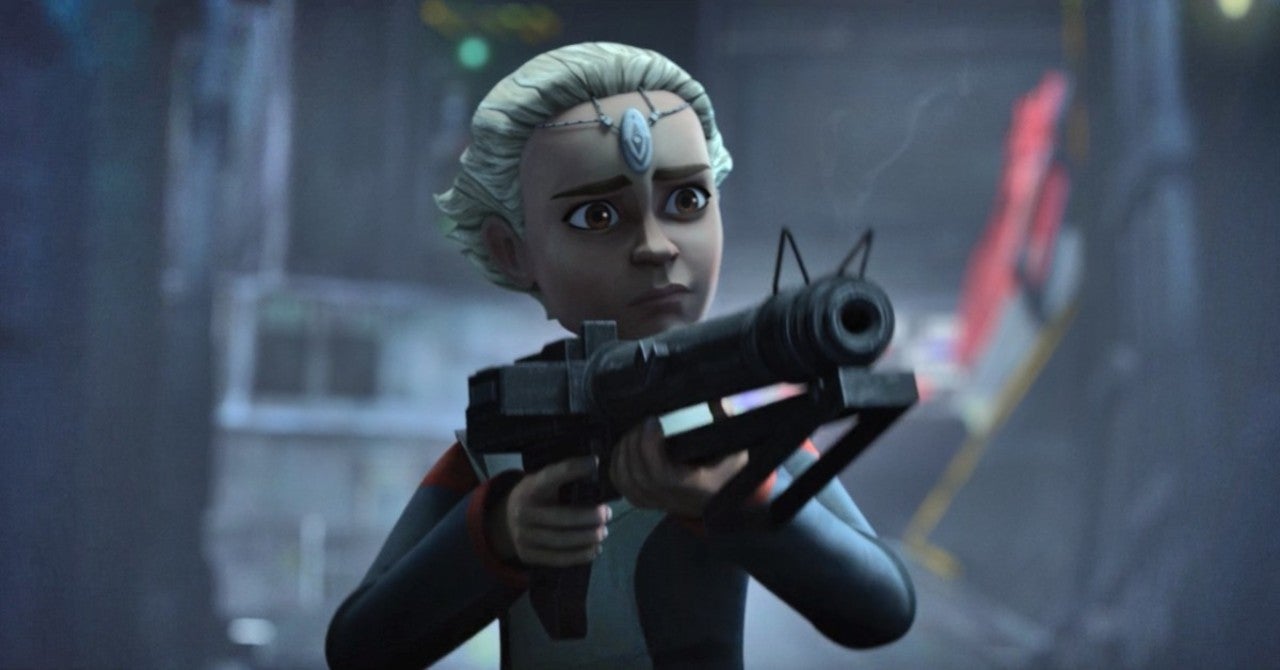 Star Wars: The Bad Batch‘s premiere episode is not out on Disney+, and it answers one major question that Star Wars fans have had since The Bad Batch trailers dropped: who is the kid? Early promos showed that Clone Force 99 (aka “The Bad Batch”) would be trying to escape the newly-risen Galactic Empire with a young ward in their care: Omega. The name clearly had some ominous meaning attached to it – but that meaning has been unclear – until now. So, is Omega destined to become a major Star Wars character we’ve already met (as some fans theorize)?

As we learn in The Bad Batch premiere, “Aftermath”, Omega is no normal child: she’s indeed the “omega” of the enhanced clones the Kaminoans geneticsts created, along with the four original members of Clone Force 99 (Hunter, Wrecker, Tech, and Crosshair).

After Clone Force 99 finishes a series-defining mission on the planet Kaller during Order 66, they are brought back to Kamino for scanning. It’s there that Omega quickly bonds with them, inserting herself into the group, much to their chagrin. It’s Omega who begins to observe that Clone Force 99 is in danger and that Wilhuff Tarkin was looking to curtail the enhanced clones, due to their lack of inhibitor chip programming. After Clone Force 99 has their loyalty tested and disobedience proven to Tarkin (by failing to assassinate Saw Gerrera and his group), Omega is locked up in a cell along with Clone Force 99.

The Bad Batch discerns that Omega is one of their own (an enhanced clone) and commits to escaping with her. Omega proves her worth in the breakout, helping Clone Force 99 escape their cell, and helping them at key moments during the battle to escape from Kamino.

Omega remains somewhat mysterious by the time The Bad Batch premiere ends. We know her enhancements give her a “heightened state of awareness,” but what, exactly, that means. Omega shows serious cunning and strategy when investigating Tarkin; she also seems highly empathetic, able to interpret what Crosshair is thinking, in a pivotal moment of doubt. Omega seems to be unusually intuitive, able to take up a blaster during battle (presumably for the first time) and shoot with better accuracy than Crosshair, which is a feat in and of itself. It seems easy to infer that the Omega is one of Kamino’s finer products – which is why geneticist Nala Se kept her close at all times.

It remains to be seen what Omega’s full potential really is – and who she may become later on in the Star Wars franchise.

Star Wars: The Bad Batch is now streaming on Disney+.

Marvel’s MODOK Isn’t in the MCU
Harry Potter and the Cursed Child Aiming for 2022 Reopening
Star Wars: The Bad Batch Review: Stepping Strongly Into the Dark Times
Fear the Walking Dead: Why Morgan Jones Is the Key to “The End Is the Beginning”
New Returnal Update Released, Patch Notes Revealed