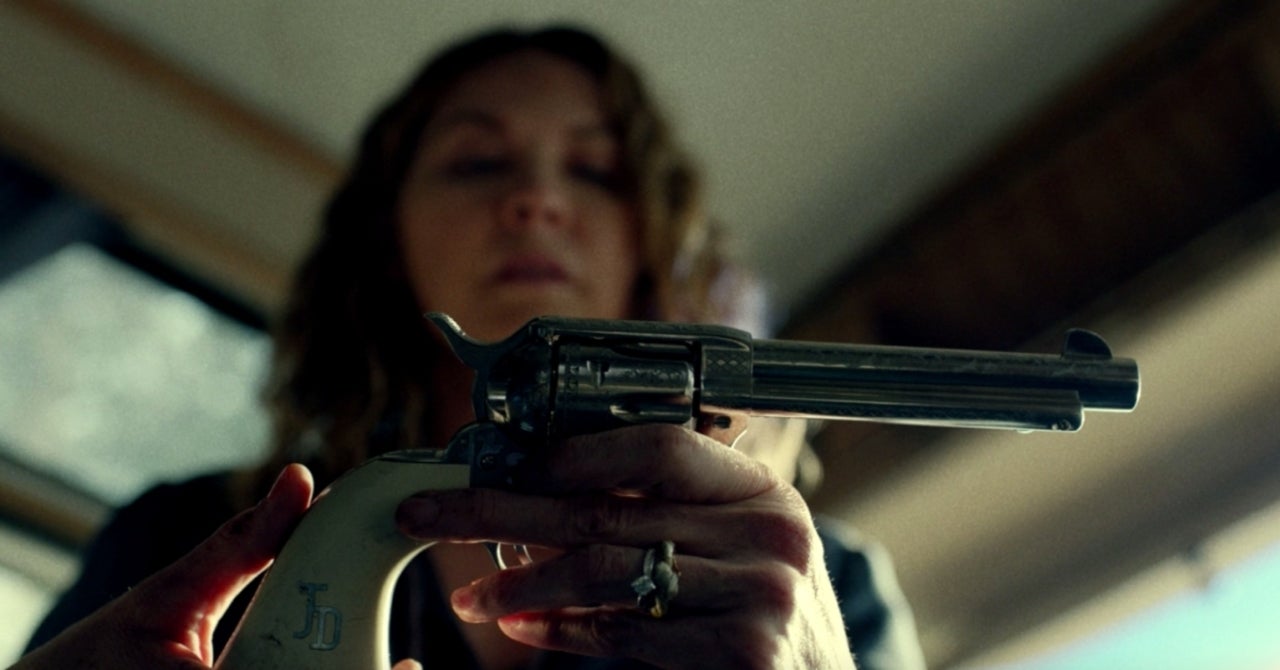 June Dorie (Jenna Elfman) digs into a new mystery and uncovers an unexpected ally in Sunday’s Fear the Walking Dead Season 6 Episode 13, “J.D.” When the gun-slinging widow splits off from the group to gather information and help stop an oncoming threat from underground, she meets a stranger who could be the key to thwarting Teddy (John Glover) and his group behind “the end is the beginning.” As June and this stranger reckon with the past — and the crushing loss that started the half-season with a bang — Dwight (Austin Amelio) and Sherry (Christine Evangelista) struggle to come back together over unsettled scores, and an old enemy makes their last stand.

1. John Dorie was murdered by Dakota. After John (Garret Dillahunt) solves the murder mystery that haunted him at Lawton, Dakota (Zoe Colletti) guns him down out of fear he’ll expose her as a killer and threaten her future away from her mother Virginia (Colby Minifie).

2. June killed Virginia. Blaming the Pioneer leader for her husband’s death, June shoots the captured Virginia and walks away from the dam community founded by Morgan (Lennie James) for breaking its cardinal rule.

3. Ranger Hill is still on the run. Virginia’s right-hand man, Ranger Hill (Craig Nigh), evades capture when a standoff turns into a shootout at Lawton in Episode 609, “Things Left to Do.” Hill makes off with one of two matching pistols he confiscates during John’s burial outside the Dorie cabin.

Here are the 6 things you need to know before this Sunday’s #FearTWD or stream it now on @AMCPlus. pic.twitter.com/5hcbEdFFki

4. Grace went into labor on her way to see June. While making the five or six-hour trip to the hospital June is building, Grace (Karen David) goes into labor and Morgan delivers the baby when they’re attacked by Teddy’s henchman Riley (Nick Stahl) in Episode 612, “In Dreams.”

5. Grace’s baby did not survive. Morgan blames June for the stillborn delivery of Grace’s baby girl Athena, who absorbs the deadly radiation her mother was exposed to while manning a melted-down power plant.

Follow the author @CameronBonomolo on Twitter for all things TWD. New episodes of Fear the Walking Dead Season 6 premiere Sundays at 9/8c on AMC.

Pop Team Epic’s Bkub Okawa Makes VTuber Debut!
Marvel celebrates Miracleman’s 40th anniversary with special one-shot this October
Get your paws on Marvel’s new PLANET OF THE APES omnibus next year
Uzaki-chan Wants to Hang Out! Season 2 to Air This Fall!
The Maid I Hired Recently Is Mysterious to Air From July 23!