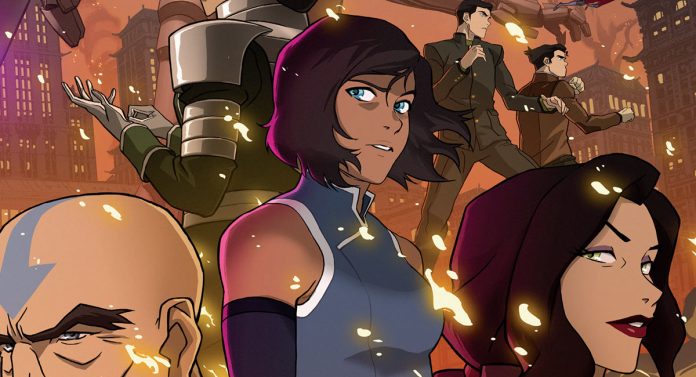 Next year marks the tenth anniversary of the debut of The Legend of Korra, the acclaimed animated series and spin-off of Avatar: The Last Airbender. To celebrate the occasion Dark Horse Comics is reissuing multiple volumes of their artbook series for the show, and today The Beat is pleased to reveal the cover artwork for the new edition of the fourth and final volume of the series, The Legend of Korra: The Art of the Animated Series–Book 4: Balance.

Here’s how Dark Horse describes the second edition of the artbook:

Go behind the scenes of the last season of the animated series in The Legend of Korra Book Four–– Balance, created by Michael Dante DiMartino and Bryan Konietzko, the same creative team that brought you the blockbuster
show Avatar: The Last Airbender!

Reprinted just in time for the anniversary of the animated series, this handsome hardcover contains hundreds of art pieces created during the development of the show’s fourth and final season. Featuring creator commentary from DiMartino and Konietzko, this is an intimate look inside the creative process that brought the mystical world of bending and a new generation of heroes to life, and the thoughts of the folks who created it!

The first edition of the Balance artbook was released back in September of 2015. Along with the new cover art, the second edition of the book will also be available in a deluxe edition, including a slipcase and a commemorative lithograph of the book’s original cover art.

The re-issued fourth volume rounds out the series of Legend of Korra artbooks. The first two volumes have already had new editions released this year in both standard and deluxe versions, while the third volume, Change, is due out in February of next year.

Created by Michael Dante DiMartino and Bryan Konietzko, The Legend of Korra ran for fifty-two episodes on Nickelodeon, from 2012 through 2014. The series has continued in comics form from Dark Horse, with a pair of trilogies, Turf Wars and Ruins of the Empire, both written by DiMartino and illustrated by Irene Koh and Michelle Wong, respectively, and released between 2017 and 2020.

Look for the second edition of The Legend of Korra: The Art of the Animated Series–Book 4: Balance to arrive in stores on June 21st, 2022.