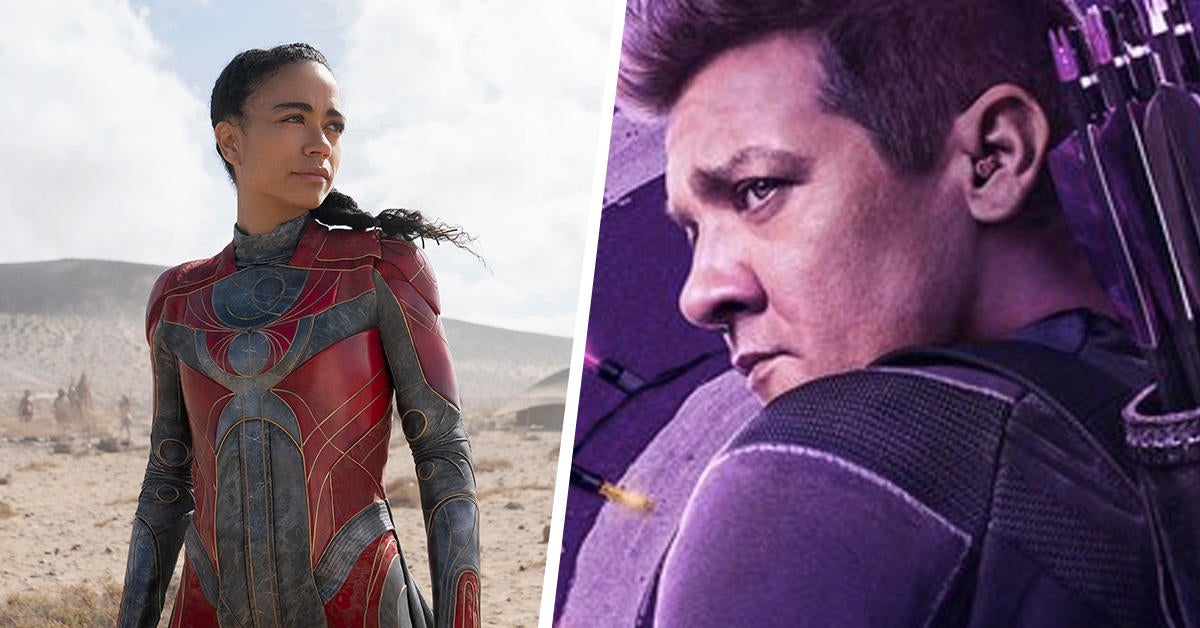 Hawkeye debuted on Disney+ on Wednesday and fans have eagerly been tuning in to the latest offering from the MCU. The eagerly-anticipated series not only continues the story of one of the Avengers we’ve spent the least time with, Clint Barton/Hawkeye (Jeremy Renner), and introduces beloved character to the screen as well, Kate Bishop (Hailee Steinfeld) and both fans and critics are loving it, praising the performances and Marvel’s return to street-level stories. But there is another reason Hawkeye is exciting. It’s the first time in the MCU that a hero is depicted wearing hearing aids. More than that, the series will also feature a deaf character, Maya Lopez/Echo (Alaqua Cox). Add to that the most recent theatrical entry into the MCU, Eternals, also featured a deaf hero, Makkari (Lauren Ridloff) and you have significant – albeit overdue – representation for the deaf and hard of hearing community and it’s representation that is more important and more impactful than you may think.

According to the National Institute on Deafness and Other Communication Disorders, approximately 15 percent of American adults aged 18 and over report some issues with hearing. That’s around 37.5 million people and while that encompasses any sort of hearing issue, around 28.8 million American adults could benefit from the use of hearing aids. One in eight people in the U.S. over the age of twelve has hearing loss in both ears. That is a lot of people with some sort of hearing concern. That’s a lot of people who can look at Marvel’s deaf and hard-of-hearing heroes and see themselves, but taking it beyond just that, deaf and hard of hearing representation also brings education as well as change. Since Eternals‘ release, there has been an increase in interest in learning sign language, but there has also been the expansion of the use of open captions in theaters.

Earlier this year, AMC Theatres announced that they would be adding open captions – at hundreds of their theater locations across the U.S. While open captions – which are similar to subtitles – are beneficial to those with hearing loss, they’re also useful for other communication concerns, including but not limited to those for whom English is not their first language. Additionally, the offering of open captions is considered by many to be a safety benefit as there are often concerns with assisted listening devices, which get reused, something not ideal in a pandemic. Open captions are a huge step forward, and Eternals played a part in that.

“Well, I give props to Marvel. When I came into the process, they already have this deaf superhero written into the treatment. And then Lauren [Ridloff] coming in, really, I completely rely on her to bring this character to life,” Eternals director Chloe Zhao explained to ComicBook. “And I learned so much about the things that I never thought. The idea of deaf gain, the idea of there’s something that she is capable of doing and experiencing with the world that I don’t have a chance to experience. And that’s something so beautiful.

“And she also really is advocating the experience of theatrical experience and not just relying on the box. There’s a box where you read this,” she added. “So it was very important for us to have closed captioning on the screen for the deaf community at our opening, and then also encouraging the theaters and making sure they do that as well.”

The inclusion of deaf and hard-of-hearing characters in the MCU via Eternals and Hawkeye also has another, perhaps more subtle, educational impact in that the different characters are examples of the different kinds of hearing differences people experiences. In Eternals, Makkari is deaf and it’s part of who she has been her whole existence. However, in Hawkeye, Clint’s hearing loss is different. One of the things Hawkeye does well is that it doesn’t directly address how he lost hearing, but offers a variety of contributing factors. It’s subtle, but it addresses that hearing loss is as much a condition that can develop as it is something that one is born with. In Clint’s situation particularly, that means we get to see his family also adapting to his hearing loss, including a touching scene in which his young son uses ASL to speak to him. This sort of representation can help ease the stigma some with progressive or environmental hearing loss experience and that’s always a good thing.

With the introduction of deaf characters like Makkari and Maya Lopez/Echo as well as making Clint Barton/Hawkeye canonically hard of hearing in the MCU, Marvel Studios is making big strides towards making superhero entertainment more representative and, in doing so are helping to educate and inspire. By showing different kinds of hearing loss and how the heroes relate to it, the MCU is also educating its audience and making real changes to the entertainment experience, changes that include everyone. One of the wonderful things about superhero stories is the theme within them that anyone can be a hero. Now, on the big screen, that includes deaf and hard-of-hearing folks, too.

Eternals is now in theaters. Hawkeye is now streaming on Disney+.