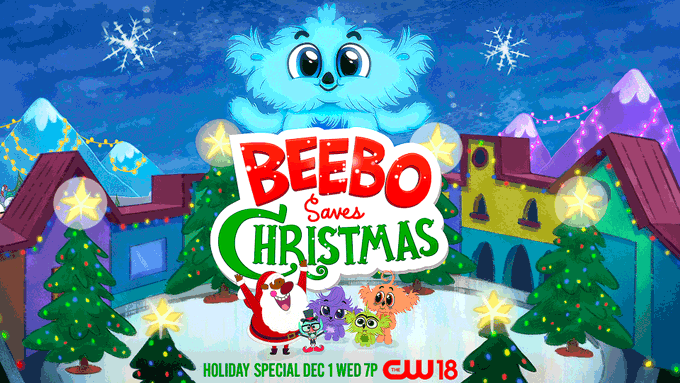 Next week, The CW will air Beebo Saves Christmas, the first animated primetime special to spin out of the Arrowverse. The special stars Ben Diskin as the voice of Beebo, along with an all-star cast that includes Ernie Hudson as Santa Claus, and a number of original characters played by the likes of Yvette Nicole Brown and Chris Kattan. As soon as the special was announced, fans were excited — but they also wondered whether this would be some kind of crazy superhero adventure where Beebo and friends met up with the Legends (hey — anything can happen on DC’s Legends of Tomorrow) or a more traditional Christmas romp.

Turns out, it’s the latter, as Beebo helps Santa regain control of the North Pole from an efficiency-obsessed elf named Sprinkles. There are a few wink-and-a-nod jokes that Legends fans will understand, but in general, it’s a Beebo special.

“I had seen the original Beebo episode of a Legends, and then they sent me a couple of other episodes,” co-writer Kevin Shinick, who penned the special, told ComicBook. “So they sent me that and it really became a question of ‘What are we doing here?’ We didn’t want to include the Legends characters necessarily in this, because at first it was like, ‘Do we connect it to Legends that much so that people know where he’s from?’ Instead we went the route of being like this is kind of a special that would air in the world of DC, in the Arrowverse. So, the characters in Legends of Tomorrow, on Christmas, could be watching this special in their homes. Which is why in that universe, a Beebo doll was created for him to then be bought, and then zapped through time, and back to the Vikings.”

That meant building an entire in-universe world from scratch, since while fans la-la-love Beebo, they haven’t ever really seen the media that supposedly made him a must-have holiday gift back in the ’90s. Nailing the tone was easier, Shinick said, because he and Legends executive producer Matthew Maala, who co-wrote the special with him, were both already big fans of Christmas specials, and had pretty particular ideas as to how they would approach an in-universe version of Beebo Saves Christmas. They’re already batting ideas around for a follow-up.

“We constantly make that joke that we want an Easter special,” Shinick admitted. Because it could be any holiday. We’re always thinking up like…Easter was always the next one, then I pitched Beebo versus the groundhog or something. Something even more hysterical. But yes, we were constantly joking that once he saved Christmas, it seems like just a matter of time before maybe he gets a chance to get involved with all the other holidays.”

Beebo Saves Christmas is set for release on The CW on December 1.