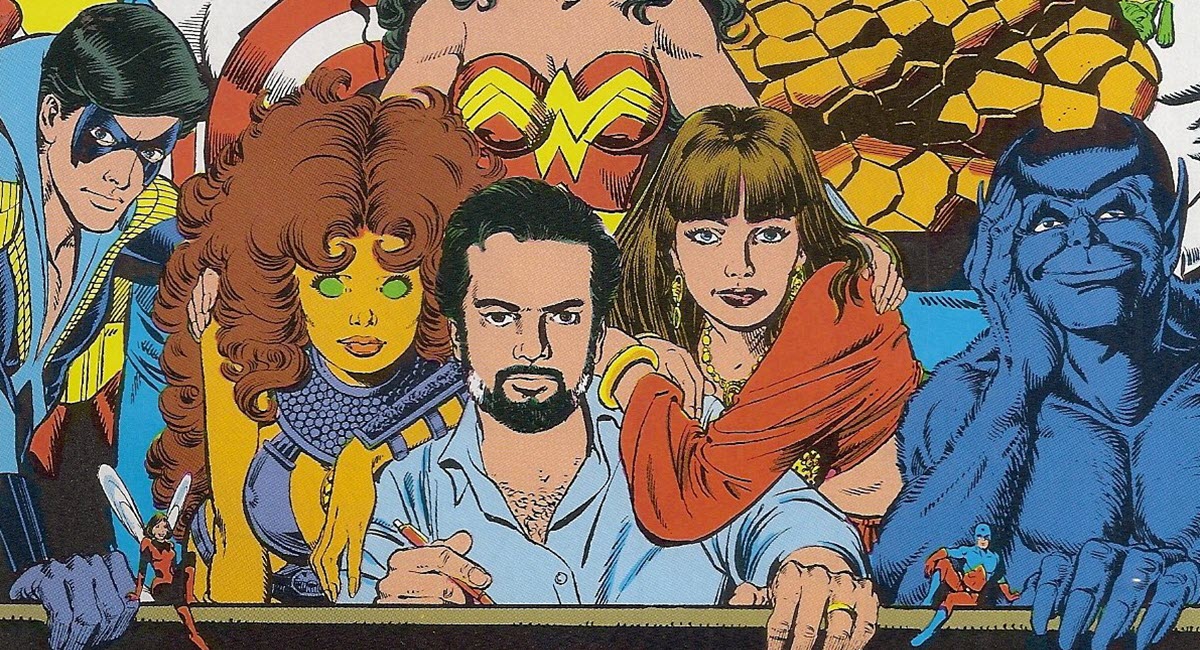 On Saturday, while many of us were out attending Free Comic Book Day celebrations, news broke that legendary artist George Pérez had died. The 67-year-old artist was diagnosed with Stage 3 Pancreatic Cancer back in late 2021, and had opted to forego what can be a long and painful treatment process, and instead to spend the rest of his days on his own terms.

Thankfully those days included basking in the warm glow of love and affection from his many fans and peers. It’s a beautiful thing to get to tell someone how much they mean to you before they’re gone, and as much as Pérez and his family must have appreciated the outpouring of support, it was just as much a gift that he gave to us to have the opportunity to express it to him while we still could.

As news spread of Pérez’s passing on Saturday, tributes came in from across social media. They’re too numerous to collect all of them – as numerous as the number of characters Pérez could fit on one of his signature spreads – but here’s just a few from those who worked with, knew, and loved him:

I am so glad to have known and worked with George. And glad he was able to see and hold the new JLA/AVENGERS edition, and know how much he meant to readers everywhere.

It was an honor and a privilege, George. https://t.co/PRSI9M4JW5

Very sad to hear that the great artist and writer George Perez passed away. No one could do what George did best. His enthusiasm for comics, and his ability to give “added value” to any plot or script he drew is a testament to his storytelling talents. Condolences

George Pérez was an artist, a writer, a role model, and a friend. His work paved seminal stories across comics, and his legacy of kindness and generosity will never be forgotten. Our family at Marvel mourns his loss today, and our hearts are with his family and loved ones. pic.twitter.com/Z61gXE1zk4

RIP George Pérez. We will miss you. pic.twitter.com/u3CfzzXZ0i

I love you forever George Perez. My dear friend. My mentor. My inspiration. I wanted to be like you when I grew up. But I still have a lot of growing up to do to fit in your shining armor. My Knight. My King. My adored friend. pic.twitter.com/9h6i8jPuL8

We lost another of the absolute greats this weekend with the passing of the legendary artist, writer and creator George Pérez. His career is truly a testament to what one can achieve in life when singularly focused on what one loves to do.

RIP dearest dearest George Perez. Working with George on Wonder Woman was one of the true highlights of my career. His massive talent & impact in comics is immeasurable, his legacy everlasting. Will always remember his kindness, positivity & laughter. Love you George. pic.twitter.com/DGCda7JkE3

Goodbye, George Pérez. One of the greatest artists to ever pick up a pen and one of the kindest people you could ever hope to meet.
All love to his family, friends and fans. pic.twitter.com/ERiVl6oGWX

The passing of the magnificent George Perez makes me think about how cartoonists transmit their love for characters across generations. When I saw how enthusiastically he drew Robotman, my affinity for the then obscure hero blazed up into a true passion. What a gift George was! pic.twitter.com/z5xvy187ar

GEORGE PÉREZ, another giant of comics, has left us almost a week after Neal…
Sending love to his family and all his friends and fans.
We are gonna miss you, your big smile, your kindness, your happy shirts, George, see you on the other side. pic.twitter.com/klqkmgpN27

If by some chance you follow me and are not a comics fan, here’s what losing Neal Adams and George Perez over the course of eight days is, culturally: imagine Martin Scorsese and Steven Spielberg dying in the same week

Spent the day working on Wonder Woman, and thinking about George Pérez. What a loss we suffer, what a legacy he left behind. pic.twitter.com/JKOnvcc0T4

George Perez was an absolute staple of my childhood comics reading. His Titans work changed the way I looked at storytelling and in many ways that decompression I later used was as much in response to my trying to capture how reading a Perez comic made me feel.

My #watercolor of legendary #GeorgePerez.
We climbed the pyramids in #Teotihuacan #Mexico. & I made ink drawings of him on the Pyramids.
We signed together in Chicago & Stan Lee joined to say hello & they both lit up.
Thanks for all the art, ideas, stories, characters, & joy! pic.twitter.com/QnrBLuLn6c

Anything good I’ve done in comics, I either learned from #GeorgePerez or learned to do BETTER. Not just drawing, but being generous with fans and fellow professionals. Following my passions and living life passionately. The 1 print piece I did with George, his line art my colors. pic.twitter.com/RzC9aNuQVU

Incredibly sad to hear we lost this creative giant. The importance of his influence on the character we all love cannot be understated. Thank you so much for the love and passion you poured into such great work for so many, George. We will miss you♥️#GeorgePerez #WonderWoman pic.twitter.com/rbkgP6J3d2

George Pérez is a giant on this Earth.

His art is huge, his life larger. His work is massive, his love more so. To say he was a “personality” belittles the language.

George Pérez was unique. There truly will never be another.

He is our friend; our comrade. We love him forever.

Over the course of forty years in comics as an artist and writer, George Pérez drew nearly every major character in the Marvel and DC Comics rosters. With frequent collaborator Marv Wolfman, Pérez co-created The New Teen Titans, which teamed existing sidekicks Robin, Wonder Girl, and Kid Flash with new characters Starfire, Raven, Cyborg, and a revamped Beast Boy (now called Changeling). Wolfman and Pérez would eventually graduate Dick Grayson out of the Robin identity, creating the character of Nightwing for the former boy wonder. The duo were also responsible for 1985’s Crisis on Infinite Earths, a continuity-shattering event series that saw major characters like The Flash and Supergirl perish in battle, and that rewrote and streamlined DC’s entire 50-year history. Following Crisis, Pérez took over a relaunched Wonder Woman series, integrating elements of Greek mythology into the character’s history for the first time. Pérez would ultimately return to the Avengers in the late ’90s, and in 2003, with Avengers writer Kurt Busiek, he drew a much-anticipated crossover between Marvel’s Avengers and DC’s JLA. Over the course of the four-issue series, Pérez would draw every character who had ever been a member of either team.

Back in 2019, Pérez announced his retirement from comics, with a message to his fans that ended with this:

“I’ve had a wonderfully good run doing exactly what I have wanted to do since I was a child. Now I can sit back and watch the stuff I helped create entertain whole new generations. That’s a pretty nice legacy to look back on.”

No one could have said it better.

Thank you for everything, George. You will be sorely, sorely missed.