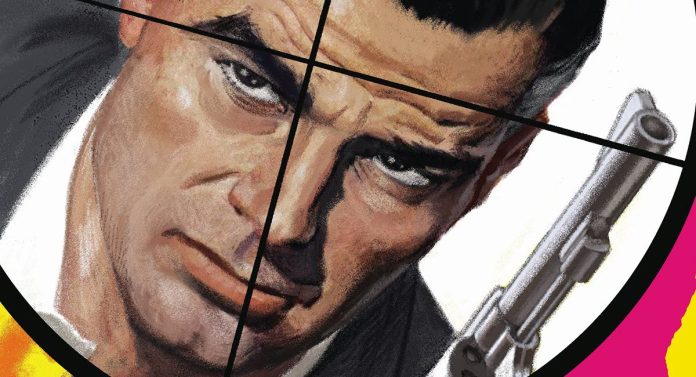 The Human Target, the currently-running DC Comics Black Label series from writer Tom King, artist Greg Smallwood, and letterer Clayton Cowles, has followed titular Human Target Christopher Chance’s investigation into who attempted to poison Lex Luthor – and accidentally poisoned him instead, leaving him 12 days to identify his own killer. The ticking-clock search has focused on the former members of Justice League International, and today DC Comics announced Tales of the Human Target, a new 48-page prequel one-shot that will fill in backstory for Chance’s relationships with those Leaguers in the time before his poisoning. King and Smallwood will be joined by artists Mikel Janín, Rafael Albuquerque, and original Justice League International artist Kevin Maguire for the one-shot.

Here’s how DC describes Tales of the Human Target:

In this one-shot anthology, Christopher Chance “teams up” with members of the Justice League International – some of whom already are prominently involved in this story – in four connecting mysteries, and one of them may be responsible for the poison that has The Human Target living on borrowed time.

Greg Smallwood provides the main cover for the one-shot, seen above. The issue also features a pair of variant covers from artists David Marquez (open-to-order) and Jorge Jiménez (1-in-25 ratio).

King and Smallwood’s The Human Target has been a hardboiled noir-infused series, with all the familiar tropes of the genre used to great effect. The melding of the Justice Leaguers to those tropes hasn’t always meshed perfectly with the established characterization for the team’s members, but with Black Label books being set outside of continuity it’s easy to not get too bent out of shape about that. It’ll be interesting to see how this new one-shot informs what’s going on in the main series.

Check out Marquez and Jiménez’s variant covers for the new one-shot below. Tales of The Human Target is due out in comic shops and digitally on Tuesday, September 13th. The second half of the main series kicks off two weeks later with The Human Target #7 (of 12) on September 27th.